I lay in bed that night, unable to sleep. Do all teachers have nights like this, in which they worry that they've metamorphosed from lovable curmudgeons into oppressors, though they're not quite sure how? I wish I could say that as I tossed and turned I was pondering what I would later come to see as the eloquence and cogency of Luna's arguments, but I was just feeling shitty.

And then two words floated into my mind: "You are."

If I've ever been tempted to shout "Eureka!" it was then. "Eureka!" is supposed to be reserved for Archimedean breakthroughs, which, alas, this did not turn out to be. I later discovered that many others had had exactly the same idea. At that moment, however, I thought I was the first. A genius, basically. The mortifying pizza party faded.

Had you once been exclusively plural? And had it evolved to be singular as well, though retaining its original plural verb? Might you, in fact, be a lot like they?

The answers turned out to be yes, yes, and yes.

Interesting. A prescriptivist teacher gets called out for griping about "themselves", and realizes there's a very clear precedent for seeming singular/plural mismatch: thou/thee used to be singular, Ye/You was plural. "You" became singular, but we still say "You are" not "You is" (and then we started looking around for a universal "plural you"...)

I was thinking a bit about neutral pronouns - how they serve both as ambiguity (and a way to avoid the BS of "default male") but also for people who aren't a fit for the gender binary.

Heh, I guess there's a parallel between deciding to prefer "they/them" pronouns as a protest against being so worried about specific pronouns in the first place, and thinking about skin tones in hands and face emoji... if canary yellow is a good "race-neutral" color or if, like the cartoon Simpsons, it codes as white and so isn't good for a default. (And if a coworker with a darker complexion does a thumbs up that matches their skin, is it ok to just +1 that, even when it's not your tone? Like that seems less awkward than a separate thumbs up that matches your own paler skin. Probably better to switch to the checkmark or "+1" icon in that case.)

When Sir Walter Raleigh was tried for treason in 1603, the prosecutor uttered the worst insult he could think of: "I *thou* thee, thou traitor." 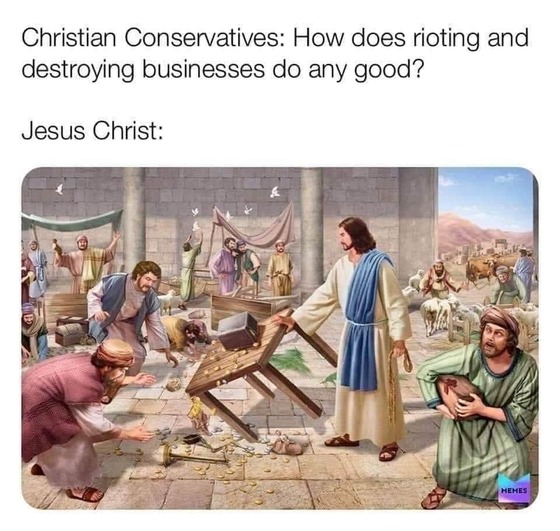 (Excellent point about Jesus and the money lenders...) Thoughts on work:
I should start recasting "paying closer attention in meetings" as a form of meditation. It's way too easy to try and multitask - and because my general form of taking in information is based on skimming and getting the gist, I can usually get by ok - but I think more focus might be a better quality form of life.

Tangentially related to that: music. I like to listen to my new music playlist as often as I can during a work-month, but to be honest when it's time to hunker down I get better results with my "psyched!" list, energetic/inspiring music that I've listened enough to that it's very familiar. So I should probably listen to that more... but it always feels like a horse putting blinders on, losing the opportunity to get more familiar with the new stuff...