ramble
February 8, 2021
Sam Harris podcast speaking with Iain McGilchrist on
on The Divided Brain: on how the two hemispheres interact and form us, and other tangents with implications for culture as a whole.

As always, I'm incredibly intrigued by the split mind topic. I feel as if a lot of different psychological models are about this divide: Freud's Ego/Id, the conscious vs the subconscious self, the "Elephant and the Rider" metaphor, the inner-child and..uh, the rest of us. McGilchrist adds another framing: the Master and his Emissary - the Right brain being the Master that sends the Emissary out to communicate with the world.

One question is, do all these models map well to a Left/Right hemisphere split? (And in that case, what about Society of Mind like models that introduce a kind of "subsystems rousing the rest of parliament" idea?).

Before getting into this, I'd note one small pragmatic breakthrough: mnemonically, I have a hard time remembering which stereotype was of the "Left Brain" and which of the right; but now I can remember Left = L = Language, Right = R = Real, as in "keeping it real"* (and as the Chapelle Show reminds us, keeping it real can go very wrong sometimes.)

"Master/Emissary" would seem to be closest to "Elephant/Rider" - but McGilchrist has a thesis that our society is poorer because we've been letting the left style of thinking side gain ascendency. The second half of his book (named after the "Master and his Emissary" model) is said to point to how various cultures - the Greeks, Renaissance Europe have thrived when they've achieved a better balance. And during the podcast he takes a tangential poke at wokeness, claiming it's a left-brain kind of thing, and lacking the warmth and fundamental humanness of more Right-brain-oriented approaches.

So, assuming there's something to this split - which is a lot to grant... well, here's my best explanation as to what's going on. The Left brain can be more clever, the Right brain can me more wise. The Right brain is the seat of muscle memory and where repeated experience becomes knowledge. But - if those experiences have a consistent bias (like it may well in a society that has a lot of racist power inequity soaking through it) then the Right brain will have a broken, foul, yet self-assured wisdom. The Left brain - the part dedicated to our social interface, explaining ourselves to others - also has the tools of language and rational thought. If to the "anti-PC" folks, the Left brain - which, by chance, happens to be the political left as well - sounds shrill or vengeful, some of that is because it's engaged in trying to overthrow this very self-satisfied knowledge of the Right brain that has inequity and injustice impressed deeply into it as "just the way things are".

So I go on about this topic in part because I think it's important to my development as a more mature person. I feel it would be useful if my smarty pants Left brain could have a more solid model of what's actually going on in there. Like, if I have a flare up of temper - is that Left brain or Right brain? Or when I find a part of myself looking for a moment of distraction where that part will then impel my body to go grab a tasty snack... which side is driving that? And which side resents it?

My thought is that it's my Right brain with those more negative qualities (which is why I'm wondering if I'll tackle McGilchrist with skepticism, since he is so in praise of the Right)- also I wonder if my youthful religiosity - where the Left brain felt that understanding and acting on God's will from His Objectively True point of view was CRITICAL to keeping me from burning in hell - led me to be too cerebral, turning the Left brain into a bit of a nanny, and that my Right brain is immature and stunted and rather childlike - or perhaps, in a long-term sullen adolescence.

* At first I thought, aha, Left = L = Logic. But, that doesn't preclude Right = R = Rationality. So Language/Realness is a better split. The other week, my dream self came up with the following pun: 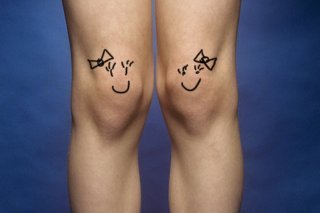 They're what Uncles have: Knee-ces Some really nice wooden craftsmanship! Sometimes i wish my creation mojo wasn't all virtual!