What I got out of that story was something still very new to me: I understood at last what art is really for, at least in certain respects. It gives somebody, individually, pleasure. You can make something that somebody likes so much that they're depressed, or they're happy, on account of that damn thing you made! In science, it's sort of general and large: You don't know the individuals who have appreciated it directly.
I understood that to sell a drawing is not to make money, but to be sure that it's in the home of someone who really wants it; someone who would feel bad if they didn't have it. This was interesting.

I thought of this story yesterday when talking about commissions, especially for arts that are avocations and not full on careers. (For me, it's the appropriate pricing for band gigs and Porchfest websites that are tricky.)

(NB, Feynman is an amazing character in physics but also emblematic of enormous sexism and structural chauvinism in scientific academia that persists to this era.)
The video is a fantasy with some fantastic but impossible rides... but it reminds that I am bummed that I have few friends who dig roller coasters and thrill rides as much as I do...ahhh the good old days of Cedar Point.... So, CPAC made up a golden Trump statue. That's cool and totally normal. Exodus 32 was way overrated anyway. Oh, and made in Mexico, to boot. 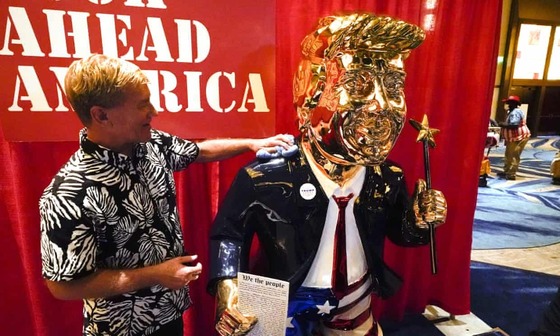 Oh and stage design of a Nazi symbol Odal rune. Someone's having fun!

Reincarnation exists. You wish it didn't. All conscious minds are simply feeding appendages of an extra dimensional parasitic being which consumes meaning from its host universe. Upon death everything you have experienced and all that you are is stripped from you. You vow to poison the beast.