ramble
Melissa and I are moving in just under 3 weeks, I'm already leaning hard into "sorry future self, I'm just throwing all this stuff in a box, you sort it out, I'm on a deadline."

I'm (again) wanting to embrace a mild minimalism, or at least reject some of my present packrat tendencies. Trying to think about my trouble spots:
* books - they let me feel like I'm projecting smartness, and I do sometimes want to refer to the odd volume.
* old games - another self-image issue ("I am deeply versed in the history of video games") combined with "every once in a while I might want to get back to play that one thing" - even though sitting down to play is uncommon for me. Our new space is great, but compact enough that I won't be making too much of a separate gaming den; I'm even on the fence about "old CRT with an Atari" corner.
* movies (DVD/BlueRay) have elements of that, but are only a few shelves worth of stuff, and fairly orderly looking.
* electronic doodads
* toys and interesting items - decorative but enjoyable to fiddle with (like random percussion instruments etc)

I think those last two are where I need to work the hardest. I've shoved most of that stuff in boxes, and I don't think I'm going to miss much of it in the weeks 'til I move... and so I'm trying to really breathe in how much nice having JUST the stuff I use regularly at hand is - that the absence of piles of crap is a nice framing for the stuff that matters.

And part of it is understanding is that it's a 80/20, 90/10 kind of thing. For all the stuff I might get rid of, its almost a certainty that I will say "oh I wish I had that" for at least one thing (or worse, futilely hunt for it, forgetting it was disposed of)/ But that's ok. Life is full of small imperfections (like lacking an item you used to have but don't now) but feeling hemmed in by clutter is a LARGE imperfection.

The day I got my execution date, I learned something that's never left me. You have to be right here, in this moment. Like a child. They're not thinking about tomorrow or last week. They're just here. Now. Seeing a smile on someone's face, the light in their eyes, is enough. That's perfect contentment. That's joy. It's taken me a lifetime to learn that life's deepest meaning isn't found in accomplishments, but in relationships. All there ever is is this moment. You, me, all of us, right here, right now, this minute, that's love. And that ... That's a whole lifetime. 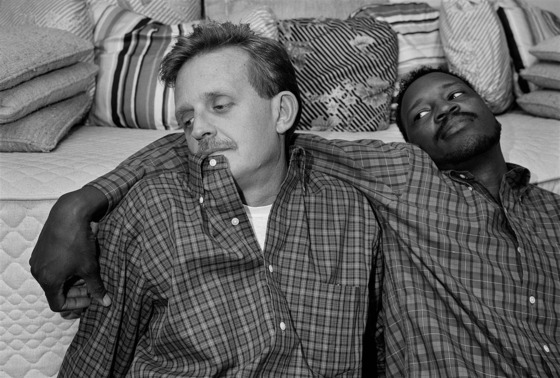 Sage Sohier, Bruce and Don, Washington, D.C., 1987 via “In the Summer of 1986, photographer Sage Sohier set out to document the lives of gay Americans in their homes. It was the peak of AIDS hysteria, and her intimate photos stood (and continue to stand) in humanizing defiance to the horrible rumours and fears circulating about the gay community in mainstream society” I wonder how many religious conservatives who say that student debt forgiveness is an immoral slap in the face to people who have paid up know about Jubilee years?
"According to the Book of Leviticus, Hebrew slaves and prisoners would be freed, debts would be forgiven, and the mercies of Yahweh would be particularly manifest." William Shatner Celebrates His 90th Birthday by Being Turned Into an AI. Huh.