ramble
May 23, 2021
A few ideas I've had banging around in my head, but I'm not sure I can get to where I want to go in terms of expressing myself. Like, I'm putting in terms of religion, but really it's all about morality and the epistemology of how on earth we deal with competing views of the truth

For starters: Some people see Atheism vs Faith as a spectrum, with agnosticism in the mushy middle (Fig A)

But what's critical to understand is there's a swerve. Strong atheism and strong faith share a kind of certainty. Agnosticism - whether of Socrates's sense of "the question is complex and life is short" or the more militant idea of "we REALLY can't KNOW this but it's CRUCIAL we keep trying" - is a different beast. (Fig 2) 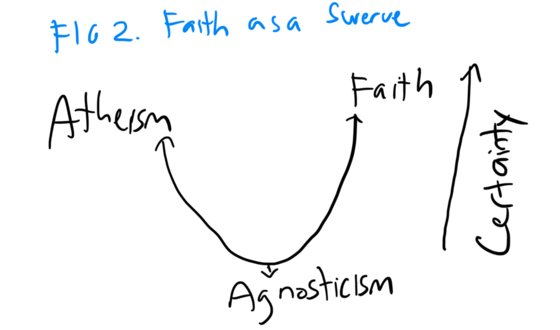 So what caused my crisis of faith as a teen was pondering on how many different firmly held and incompatible faiths there were in the world. Like, they CAN'T all be true in the sense that many of them claim to be completely and UNIVERSALLY true! So we get something like Fig 3: 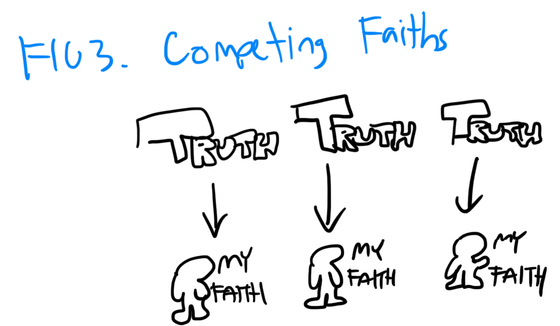 So, there's the "existential" approach to resolving this conundrum - there's no absolute truth, everyone is entitled to define their own truth. You see this with cold french philosophers and more warmly with people who talk about "My Truth" (Fig 4) 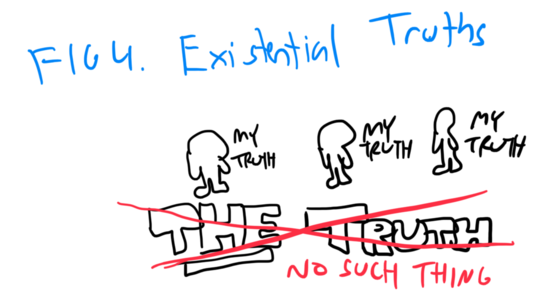 One attempt to get around this dilemma is to figure that the truth is emergent, or the kind of "many paths" approach favored by New England Unitarian Universalists. If you turn from religious faith to morality, you can get a sense of "morality is the consensus of what people say is moral" (Fig 5) 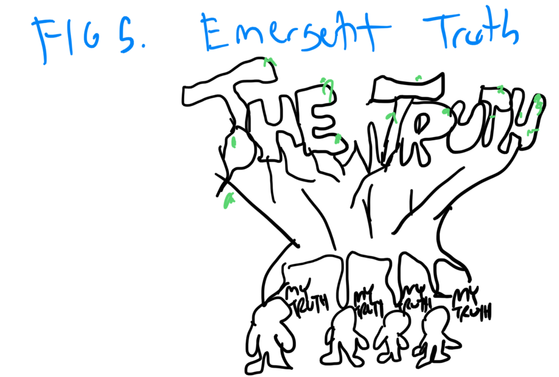 In the end, I find those unsatisfying. Maybe I'm too influenced by the omnipotent, omniscient God of my youth - (the idea of there being a "view from God's Throne, even if I'm not sure anyone or anything actually has a butt in that chair) - but I guess in the end I'm stuck with something like Fig 6 - there's The Truth, but it is uncertain, and we compare notes with others to try to get a more likely guess as to its contents. (And the kind of "special revelation" that many religions are founded on is EXTREMELY suspect.) 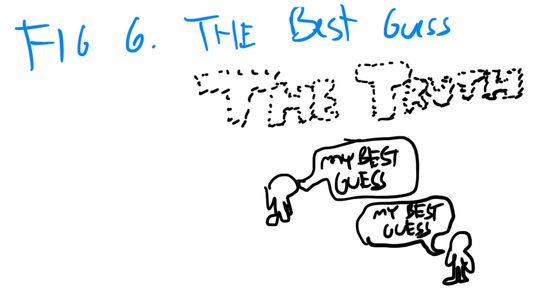 Other folk have a hard time getting how deeply this strident uncertainty drives me. It is the fundamental theme of my life.

Like I've commented before, this view makes me both more empathetic (I do not overvalue my best guesses and preferences over others) and less empathetic (I am not inclined to respect how much credence others put in their faiths and preferences.) It also makes me inclined to put what's good for a group ahead of my personal desires... the overarching desire to be good for the group and thus closer to what's good overall trumps my smaller preferences, though in healthy groups what the group wants takes my preferences into account.

I am sitting at my kitchen table waiting for my lover to arrive with lettuce and tomatoes and rum and sherry wine and a big floury loaf of bread in the fading sunlight. Coffee is percolating gently, and my mood is mellow. I have been very happy lately, just wallowing in it selfishly, knowing it will not last very long, which is all the more reason to enjoy it now. I suppose life always ends badly for almost everybody. We must have long fingers and catch at whatever we can while it is passing near us.

I'd be tempted to buy a copy but it doesn't seem to be available in digital format.

I do like the journal form. I thought Carrie Fisher's and Lena Dunham's were especially good. Any recommendations?