I just finished Alison Bechdel's new comic "The Secret to Superhuman Strength", about the kind of intertwining of her work and history of physical exercise and psychological self-examination. I've always liked the insight into queer culture her "Dykes to Watch Out For" gave me, and her other autobiographical works have resonated for me as well. 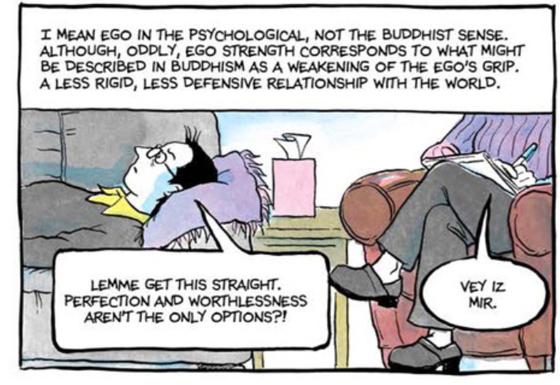 This panel made me contrast my own psychological experience. Like, I don't have the same perfectionism, but I do have this sense that my value as a person isn't intrinsic - or at least not self-originating. My value ultimately is generated by interacting with the outside world. (But, maybe unlike Bechdel, I have a fundamentally secure ego that is pretty confident I'm pretty good, and so my struggles are with fixed mindset and how I avoid taking risks that would too clearly show my limits.) 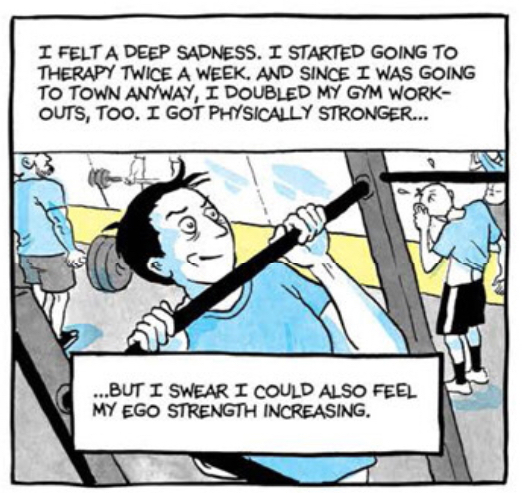 This panel got me thinking about my much remarked-upon (by me) lack of intuition about personal growth. And like, any physical improvements I may have noted during times I've worked at it more have seemed... eh, not like significant, qualitative changes. But here's an insight that feels new: for me to admit to growth feels like a condemnation of my old self. Like it's hard to say "I'm stronger now" without thinking "well I was insufficiently strong then".

I was talking with Melissa a little about this. She gets annoyed at my trite "well I don't believe in personal growth" (So has our mutual colleges buddy David Hoberman at times). Like, I wasn't born talking, or playing tuba - clearly those were skills I grew and developed. I guess then it's more like... the potential people for growth is a mix of what they're born with and the environment they find themselves in. And for some reason, for me, that realization of finite potential overshadows what someone actually decides to do with that potential. 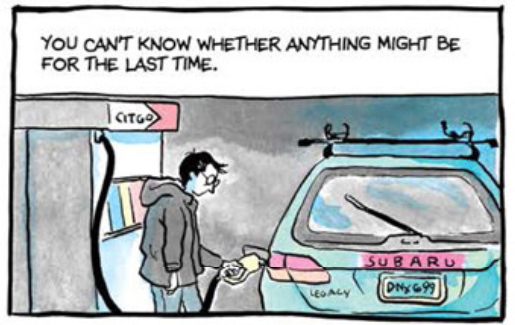 Another panel I liked for its bittersweetness nature. 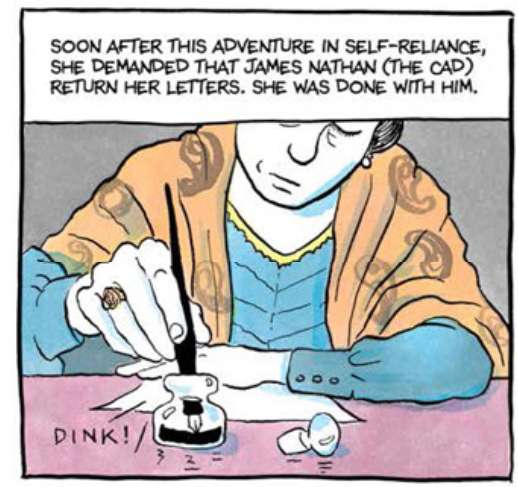 Bechdel has some side passage ranging from Emerson to Margaret Fuller to Jack Kerouac. This panel on Fuller just made me think about "returning letters". What a weird antique form of cancel culture! Seems kind of alien to a nostalgic guy like me. And seemingly somewhat impossible in this day of electronic communication.

Finally this one gave me a chuckle, especially since I can empathize with the way she lost her father.

In my country we have a saying--Mickey Mouse will see you dead.

(He's drunk delivering a speech to a hostile university audience in a fictional Central American nation but then admits there really isn't such a saying. But there should be!) Oh hey there was a slightly-more-upbeat extra sequel to "Hastily Made Cleveland Tourism Video"
HUDS + GUIs picks up where
Typeset in the Future leaves off - studies of UI across science fiction movies and elsewhere. I love this stuff! I feel like "making future UI mockups" is a job right up there with the "LEGO engineer" I wanted to be when I was a kid...