playlist
September 3, 2021
Since I Found You Gone
The Exploding Voids Kind of lovely break up song from a pretty obscure but great European group.
Final song I didn't already have from their new album... been their biggest American fan since I heard their transcendent As It Comes at the end of their indie horror film "Welk" Alone Again Or
Love Old rock, nice mix of latin sounds.
From the movie "Bottle Rock" Goosebumps (Remix)
Travis Scott & HVME Club pop.
Played by a DJ at a highschool graduation party afternoon. ★
★
★
★Let the Tiger Out
Andy Cooper Hiphop with a ton of funk.
Via this Dance Flash Mob video. Elvira
The Oak Ridge Boys Cornball countrified 80s song.
I so remember this from, like, summer camp in like 1983 or something. But Dave S mentioned it for some reason at a Vermont reunion weekend. Xiquexique
Tom Zé & José Miguel Wisnik Art song with interesting sounds that goes on a bit but... I think it has a strong "sound of toothbrushing" influence?
Matthew Greene played this at a Vermont getaway weekend. War
Hypnotic Brass Ensemble Nice NOLA style brass.
During Vermont reunion weekend, Sean mentioned this one. Solitude of Sirens
The Exploding Voids Great indie sound. "Are you the siren, or the lighthouse, to my thoughts?"
Penultimate song I didn't already on their latest album My First Girlfriend (Slowed)
MattyB Inane kid hiphop that becomes transcendent slowed down...
Found on tumblr... check out the link, I also love the animated GIF she used to post it. ★
★
★
★Be OK (Acoustic Version)
Ingrid Michaelson Upbeat song, a gal and her guitar and just a little production seasoning.
Playing in an open roofed outlet center in NJ. This Feeling
Alabama Shakes Gentle and lovely song about arrival after hard times.
Used on the show "Fleabag" ★
★
★
★Rumors
Lizzo & Cardi B Excellent empowerment hiphop, dig the bass.
Jim W wrote: 'So…I slept on Lizzo and Cardi’s “Rumors” and gotta be honest, it’s even better than Fleetwood Mac, and I love Fleetwood Mac 🤣' Kryptonite
Joey Nato & Atlus Obscure hiphop, nice beats.
My friend Jonathan has the single best track record at recommending new music that I actually like. I feel like there's probably a pretty simple formula about percussion sound he's figured out... ★
★
★
★Strange
Celeste Slow, sad, beautiful.
From a poignant scene in "Ted Lasso" So, Republican Senators breaks the government of confirmation for most of a year to steal a SCOTUS seat, Texas makes a law to unleash a legion of Deputy Dawgs to sue women and doctors, SCOTUS issues late night picayune rulings where the conservative bare majority pretend their hands are tied to stop things because of the bizarro legal cleverness. Huh.

Conservatives are cheaters. Funny seeing this on McGST. Reminds me of "Banned in Boston" and the city's reputation for puritanical overreach. 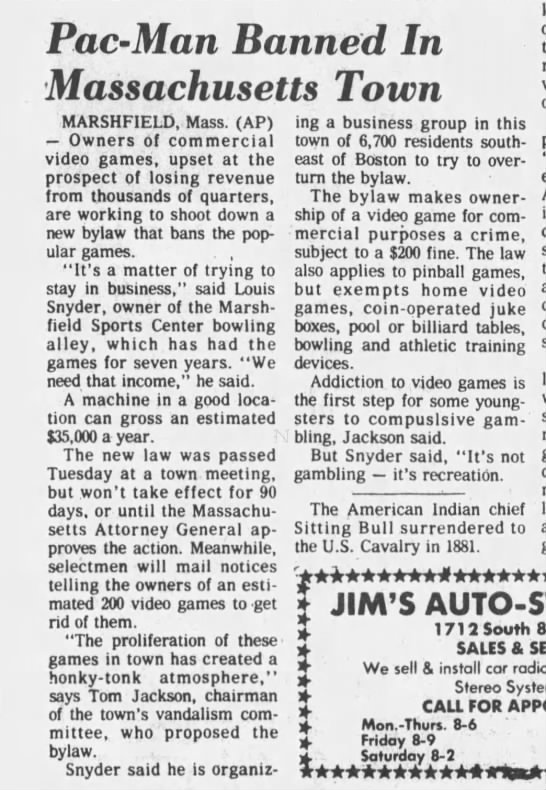 Also surprising is the estimate of $35K/year for an arcade machine! I knew the arcade industry of the early 80s - while faddish - was huge, $8 billion in 1982 when this article came out, one quarter at a time - Domestic Gross for Hollywood was only $3 billion that year! Still, $35K in a year? (Nearly $100K today). 35K = 140,000 quarters... 383 plays a day? Assume a 16 hour day, from like 8am to midnight, that's around 24 plays an hour. So not too far from constant play... so maybe that's a little exaggerated? Still. Rationality when combined with uncertainty is a great tool for empathy. You're not convinced of your own correctness, but when you put things in rational terms, that's the willingness to put things in a universal language and connect with others who might have a clearer idea of the truth.

I don't understand how some people who don't have certain, with their little fiefdoms of faith, that "I know I'm definitely right, so everyone who believes otherwise is wrong" generate much empathy... maybe just sympathy for all those wrong blighted fools.