(Warning, the humor is a little surreal and also doesn't shy from rolling further with the vague racism of the original cartoons.)

A while back I mentioned how my answer to a meme about childhood cartoons and things we... well, noticed... involved a short-haired cat cheerleader in a Heathcliff cartoon. Not that I'm anything of a furry, it's just that even then I could recognize having a preference for something tomboy-ish to anything performatively femmy-femme.

Watching the Fensler Films, I remembered how much my pre-adolescent attention was taken by Lady Jaye: 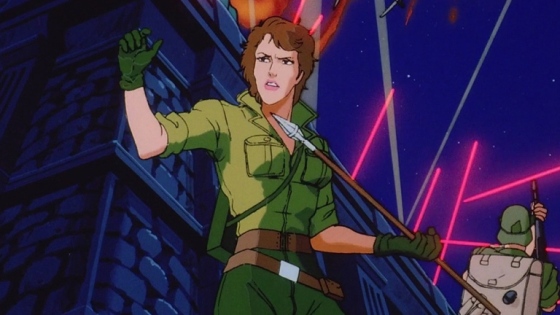 Like, compared to the other token female on the GI Joe, Scarlett, it was no contest: 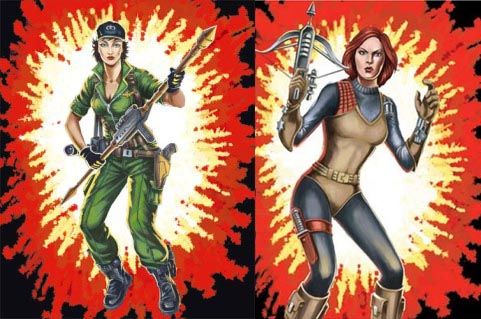 Not that either of them were particularly well-represented by their action figure box art - but ah those innocent days when just a daringly lowered zipper and some cleavage on toy packaging was of significant interest...

That kind of butch look has always had an appeal for me - clearly not the sole focus of what kind of femininity I am attracted to, but still something I dig.

Maybe I can owe it to The Salvation Army? I mean we were all, boys and girls and men and women alike dressed up in its oddly paramilitary way. (And both of my parents wore the same uniform, did the same kind of role, and even had similar hair lengths.) I mean that's just a guess, it's never 100% clear what forms our interests and leanings in those young days of figuring the world out, and our place in it.

And so classic femme and girlish stuff never held an appeal, and always seemed less cool than the stuff boys and tomboys were up to. I think too I may have developed an unfortunate association with femme as... I dunno, weak? Like demanding attention and protection and being generally distracting from the more interesting stuff in life. (Again, that's not a mature or complete view, but it's something I can at least recognize as a theme that I was imprinted with.)

I mean it probably also influences my support of Trans-rights. For me gender just isn't ALL that interesting, I can just surf on male privilege, and a general non-swaggering masculinity is comfortable for me from some mix of nature and nurture... and if someone's soulsearching tells them what they are means there's a mismatch in body and spirit, who am I or anyone to tell they're wrong? What kind of prescriptivist chutzpah would it take to say you know that person is just wrong, because they disagree with what most people have told you how things should be... Kind of chuffed about my new toolkit for making a fullscreen viewer for my blog's image galleries.