Cleaning the "blog this" part of my todo list I found this:

A friend asked the other day what percentage of people I went to youth group with "deconstructed" and what percentage remained evangelical. As I thought about it, I realized that for the most part it was the kids who took their faith the most seriously who eventually walked away.

Those of us who tearfully promised that we would follow Jesus anywhere eventually followed him out the door. The Queer kids, more than anyone, learned exactly what it meant to work out our faith with fear and trembling.

They told us to read the Bible and take it seriously and then mocked us for becoming "social justice warriors."

Now they're warning us not to deconstruct to the point of meaninglessness.

But they took a chisel to God until he fit in a box. They "deconstructed" the concept of love until it allowed them to tolerate sexual abuse, celebrate white supremacy, and look away from kids in cages.

Some of us got to where we are because we took it all to heart. We took the most foundational elements of our faith to their natural conclusions. Folks who deconstruct evangelicalism aren't drop-outs; they're graduates.

"But they took a chisel to God until he fit into a box" is probably the RAWEST line I've ever read in my life.

And while I'm not queer, just an ally, a lot of this process reflects what happened to me. The aspects of God I deeply absorbed: But the prevalence of other religions - in particular Islam - seemed incompatible with any configuration of a universal God.

And frankly, maybe this was just the affable nerd I was, jealous of the fun time other kids were having, but most of my fellow church teens seemed pretty lax in their lifestyles relative to me.

I mean, looking back with maturity, those seemingly lax believers (who also seemed to indulge more deeply in the catharsis of the altar call at the end of church band camp) probably had it right. I mean, there's a part of me that is still startled by practicing Christians who shack up before marriage! Or swear a lot.

Maybe if I had grown up with a faith that leaned more into the mystery and not knowing and was a little more relaxed on the lifestyle thing... I think the Catholics have something going with the idea of confession, even if the idea of being reliant on the institution to save oneself from hellfire has been all too readily abused. Catholics - again, at least some Catholics - also seem to have a less literalist view of things, and accepting mystery and weirdness as a part of It all. "Salvation Army" among the reasons Reasons for admission to a West Virginian lunatic asylum. 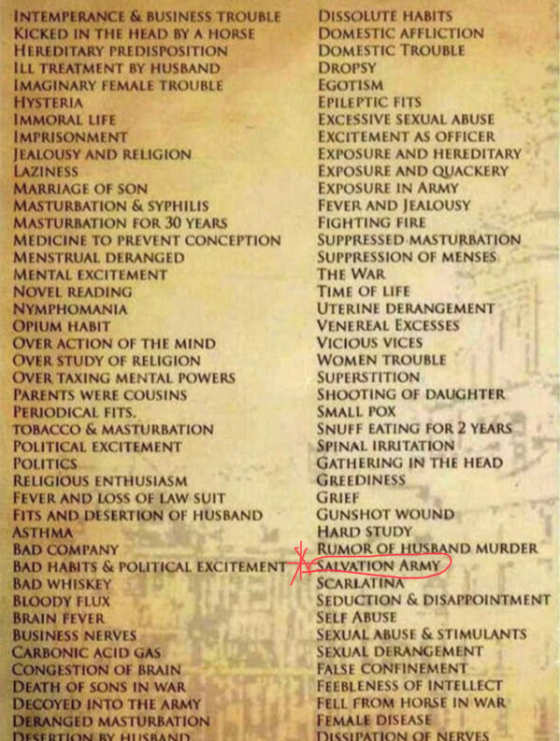 I don't know if it's worse to make a 'Army joke or a West Virginia joke. Your teeth are bones, that live outside...
Some beautiful observations on tree communities and matriarch trees