Movies on Video or Streaming (30 (-19))
Matrix Reloaded, Inside Out, Hercules, Uncut Gems, Pixels, Star Wars: The Force Awakens, It (2017), Long Weekend, Nine Days, Logan, Everything Everwhere All At Once, Walking My Life, Modern Romance, Kurt Vonnegut: Unstuck in Time, Call Me By Your Name, Ghost in the Shell, Ghost in the Shell (live action), End of Evangelion, Sheng Wang: Sweet + Juicy, This is 40, Hocus Pocus 2, Perfectly Stupid, Weird, Little Big Boy, Barbarian, Marcel the Shell with Shoes On, Popstar: Never Stop Never Stopping, It's a Wonderful Heist, The Muppet Christmas Carol, Who Killed Santa? A Murderville Murder Mystery
Wow, big drop in the number of these from 2021! I loved how the 4th Matrix films wrapped things up, but it lacked the visual scene making of the trilogy. "Inside Out" is a great introduction to parts-type models of psychology, and "Hercules" was solid as well. "Walking My Life" is a lovely movie I first saw on the way back from Japan, about a man facing his imminent death with grace. Sheng Wang is the Mitch Hedberg for our time, and kudos to "Weird" (the Weird Al biopic for being laugh out loud funny, not just heh funny.)


Books (37 (+6))
Pharmako AI, Zen of Palm, Genius at Play: The Curious Mind of John Horton Conway, Beautiful World, Where Are You, Gödel, Escher, Bach: An Eternal Golden Braid, Words at the Threshold, Creative Selection, Pac-Man: Birth of an Icon, Permutation City, The Subtle Art of Not Giving a F*ck, Helgoland, How To Hide An Empire, A History of God, Man's Search for Meaning, Basic Training, Ishmael, Another Roadside Attraction, Vaster Than Empires and More Slow, Whore of New York, The Works of His Hands, Cat's Cradle, Braiding Sweetgrass, The Joy Machine, Sick in the Head, God Bless You, Mr. Rosewater, The Age of AI, Mother Night, Slaughterhouse Five, Sirens of Titan, The Art of Money Getting, Manna, The Phantom Tollbooth, Breakfast of Champions, The Genealogical Adam & Eve, Deadeye Dick, Your Head is a Houseboat, Bluebeard: A Novel
"Gödel, Escher, Bach", "Permutation City" and "Man's Search for Meaning" were all rereads of favorites of mine for the Science and Spirituality group I co-run. (let me know if you want to join!) "Helgoland" was for the group as well; a great book on quantum stuff, and really jives with my idea that interactions are the defining element of EVERYTHING in the most fundamental way possible.

And on my "read all Vonnegut novels" kick, "Cat's Cradle" has always stood out, though Slaughterhouse Five's vision of time has been in my mind lately, and I was impressed with the maturity and thoughtfulness of Bluebeard.

"Your Head is a Houseboat" is good enough (and well illustrated enough to have been filed under "comic") that it makes me entry, because its coverage of "parts" psychology is probably better than the book I've been thinking about trying to cobble together.


Audiobooks/Podcast (11 (+1))
Imperfect Messenger, The Murderbot Diaries: All Systems Red Get Played, My Brother My Brother And Me, Retronauts, Get Anime'd, The Talk Show, Baby Geniuses, Poetry Unbound, Three Bean Salad, Articles of Interest: Take Ivy
"Get Played" managed to reinvent itself so it wasn't so torturous for its hosts, and remains head and shoulders the best and funniest premier video game podcast. And listening to its Patreon spinoff "Get Anime'd" cover Neon Genesis Evangelion was great.


Video Games (-4)
The Matrix Awakens, Just Cause 3: Sky Fortress, Just Cause 3: Mech Land Assault, Just Cause 3: Bavarian Sea Heist, Kirby and the Forgotten Land, Knotwords, Wordle, Bangai-O, Atari 50
the DLC for Just Cause 3 that turns you into Iron Man but w/ Wolverine's healing powers was worth the replay. Bangai-O was an old Dreamcast favorite- I used my own 2002 walkthough for it 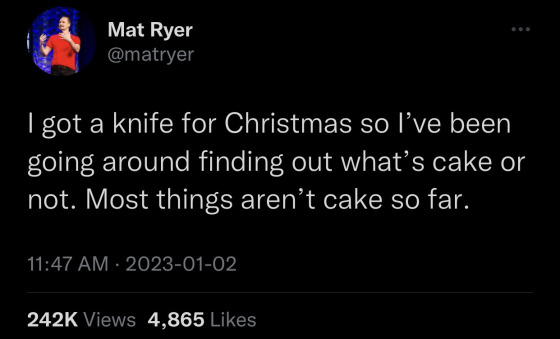