Dear Mr. Lego, There are too many types of pieces nowadays. Please, eliminate half. P.S. I am not a crackpot. 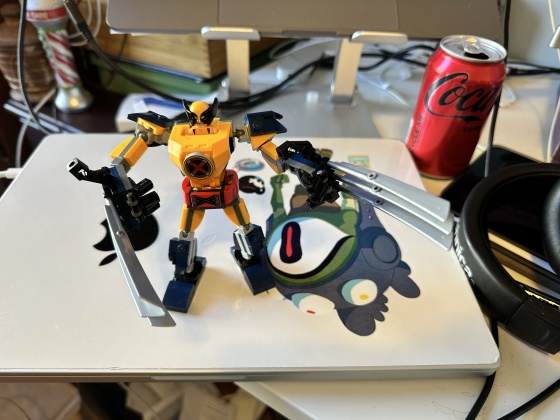 With the claws and hands it looks kinda cool, but it was weirdly unsatisfying to build. Melissa explained why - this is basically a buildable action figure, in a lot of ways it's not a classic Lego kit. (Indeed, its lack of studs to put other bricks on is almost Bionicle level. Also I don't think Wolverine-brand Yellow is a traditional Lego color...)

I watched a Evolution of Lego Star Wars video, and its feeling generally is "look how much better the newer versions look!", but the old ones from the 1990s - yeah, they just looked more Lego-y.

I never understood the "build the model once then keep it like that" mentality, but I think Lego has really leaned into it. The library of pieces has expanded so much, which means A. many of them are difficult to think of a use for in different contexts B. It's hard to keep track of all the possibilities in what bricks you do have and C. even if you know just the right hinge, finding enough matching pieces to build something symmetrically and with appropriate colors is a challenge.

Of course it's a spectrum. I probably wouldn't have been as fascinated by Lego if it was all "what can you build out of square bricks?" the hardest-core purist might demand. But Lego has basically always been "CAD for kids", or I guess now you'd say like 3D printing - the main way of making something with a real design sensibility but without the skeletal look of Erector sets, K'nex, or Tinker Toy.

80s Space Lego was interesting, with the "Blacktron" sets you started getting cooler wings and other options - but a medium-talented builder kid still had a shot at making something cooler than the kit the pieces came with.

The late 90s Star Wars - the way the X-wing came with these awesome clicky hinges was great. And like I write about in 2020, "Life on Mars" continued that path, but there was still a Lego-ness to it.

Now, I dunno. These sets are so fancy, and they might have been what let Lego survive and prosper. And they have the "Creator" sets that are often a bit more back to basics, and show by example how you can use the same set of bricks in a different formation. But somehow it feels like a step backwards from the space ships and robots I'd really like to build.

So it's a spectrum from "just squares" to "as real-world as possible", and I know this whole rant has an "Old Man Yells at Cloud" aspect. I do wish the answer was a bit more in the middle. (I don't regret splitting my childhood collection 3 ways for 3 families I love, but I do wish the pieces in my current rebooted collection, mostly with gifts given to me as a grownup, had more of the spirit of the old stuff.)

woke is "the belief there are systemic injustices in American society and the need to address them."

I'm technically a Facebook "Top Fan" of Jeremy's Razors who pitch shit like "stop buying razors from woke companies that hate you". (Daily Wire started up this shilling project when Harry's stopped running ads with them.)