band
Thanks to Liz for a surprise gift of socks! Nice thick "Happy Socks" with a great Escher-like tessellation... 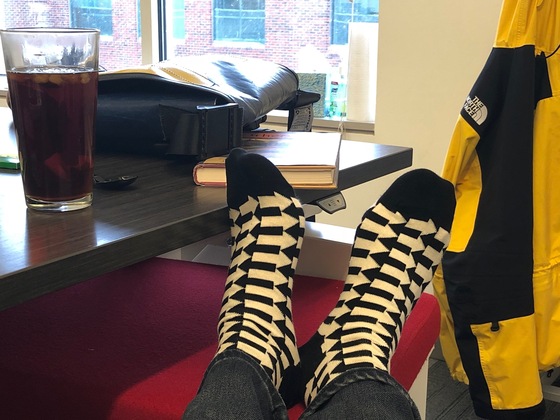 I've always tried to keep my eyes open for a better way to describe what I like in music - I listen to a lot of genres, but most of what I like has certain rhythmic things in common - stuff like Bowie or most guitar rock I'll only ever appreciate with my head, not my heart, in part because the primary musical focus is not in the drums, it's just a steady background to build on.

I've called the type of percussion I respond to "funk-tinged rhythm" or "high contrast" (since it is so often that interplay of bass sounds and higher snare-ish noise) but I'm not sure if that quite captures it.

Maybe I could say, the stuff I don't dig just uses the rhythm as an even floor, for steady pace walking, but I want the irregular floor, where you have to dance a little to walk it...

I would say they go back to the name "Cleveland Naps" (the name they had before, from 1903-1914) but I'm sure someone would pretend it's just as racist as Indians, except against French people... But mostly I would endorse being so pro-nap, as a matter of principle. Lisa Rocket and her beau Harper shot some fun footage of BABAM's performance before and after the Women's Rally - fun stuff!
Ah, Trump. Putin and the Oligarch's man in the Whitehouse, happy to overturn even a 517-5 vote in the legislature.