from dr. c. wacko and the whiz-bang miracle machine 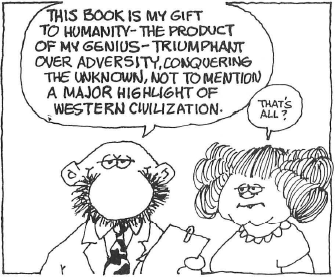 Ever rediscover a half-remembered book from your childhood and realize that it was probably wildly influential on you? Such was the case with David L. Heller and John F. Johnson's "Dr. C. Wacko Presents: Atari BASIC & The Whiz-Bang Miracle Machine". I recently found a good PDF copy at Atari Mania's Page of Atari 8-bit Books 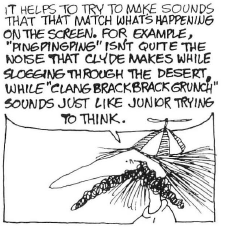 The book was a beginner-level but thorough guide to BASIC programming - I suspect I knew most of it by the time I got my hands on a copy, but it was still very cool. The style can perhaps best be described as "Early Doctor Demento" -- hardly a paragraph goes by without a gag of some kind, but still it seems like it would do a good job of explaining fundamental concepts. I can even see the book's influence in my own guide to Atari (2600) Programming, Atari 2600 101. (No cartoons, more's the pity.) I was reminded of this book when I ordered some Eggs Benedict, and I thought about this chart in it: 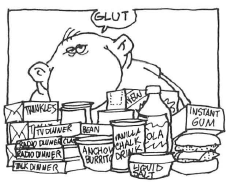 I think that for years that was my main image of Hollandaise, some kind of insane calorie vortex. (I guess I forgot how the other foods needed only a glance...)

Atari Mania also finally let me read the book's -- prequel? It was much more advanced, but came first-- companion, "Dr. C. Wacko's Miracle Guide to Designing and Programming Atari Computer Arcade Games". I'd like to think if I had had this book at the appropriate time, I finally would have gotten those damn "player/missile" graphics and in general made some better games. 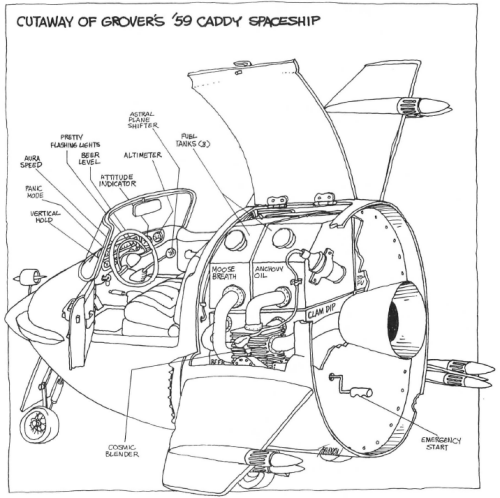 My therapist just tagged me on shoppybag.com w/ a "Designer Inspired Gold Heart Charm Toggle Bracelet Links Of Love" (+4 other folk, but hm)

from attack of the speedbitch

ramblegames
(1 comment)
November 24, 2007
For over half a decade EB and I have been playing head-to-head Tetris Attack. (With a recent trend towards 3-player Dr. Mario when his wife wants to join in, a game also favored by my Aunt and Mom.)

EB and I have noted a difference in our approaches to this kind of game. EB is a more deliberate planner, aiming to set up longer combos and chains and then sending over many damaging "garbage" blocks all at once. In recognition of my approach's humbler yet annoyingly effective nature, I've taking to calling what I do "being the speedbitch". I favor speed over cleverness. Over the years, as our Tetris Attack arms race increased (at this point we're both past our primes, not sinking quite as much relaxation time into the pursuit of rising blocks) I would of course add in new "types" of move to my arsenal, but at its core I'm all about process efficiency. (I'm also oddly blind to certain clear-outs, especially horizontal ones.)

It might not be too much of a stretch to see an echo of the speedbitch vs. the planner in how EB and I live our respective lives. I tend to shun most long-range plans-- which can go wrong, after all-- and seek to maximize short- to medium-term contentment. And I'm good at recognizing and optimizing for that. (A parallel ability to refactor and re-engineer to increase usability and efficiency is also one of my programming and UI strengths.) EB is more of a planner. There have been times (when Mo and I seemed to have found something stable and pleasant and possibly edging him out salary wise despite his equivalent smarts and having stuck around for his Masters degree) where my pseudo-Dao-ist, aimless approach irked him. Now that I'm a single guy, in a bit of a pleasant career rut, and he's accomplishing life goals in family-making as well as moving up to management (which, for an engineer, isn't all peaches and rainbows, but still) the strategic comparison has a different tone.

(By a curious bit of synchronicity, recently I've found out that a parallel "supply chain efficiency" is one of the things Nokia does really well, and has helped it achieve an international market percentage in the high-30s. They make beloved-high-end equipment too, but they're able to retail some of their bread-and-butter phones for less than some companies can make 'em.)

Like I've rambled about before, I'm increasingly of the opinion that I'm not that smart, just a very quick and somewhat tangential thinker with a fragile ego and poor memory for disconnected detail.