There are two adults and one child. Majority rules. Live like an animal or die.

20 years ago I recorded this quote via my mom, but didn't write the context, which was the two of them reflecting on how life would change with the addition of a baby. The New Nancy by Olivia James is really good!

I went back and read the recent series about the charaters at Art Camp, great fun. Art-y and Camp-y.

[pokes at puffy part of blouse] [sighs] Oh... I was hoping it was air. It's stomach.

The best break anybody ever gets is in bein' alive in the first place. An' you don't unnerstan' what a perfect deal it is until you realizes that you ain't gone be stuck with it forever, either.

from milkshakes from the blender


Accept what people offer. Drink their milkshakes. Take their love.

I'm not entirely sure of the context, but I think it predates the "my milkshake brings all the boys in the yard."

Video of the Moment
Goofy yet information rich video: Behind the Typeface: Cooper Black. The typeface "for far-sighted printers with near-sighted customers". It amazes me how many typefaces and fonts there are out there sometimes.

from the smell of hopes and dreams


My sister is superior in everything. I am truly her inferior, and I worship the very ground she walks on. I like to smell her farts because they remind me of my hopes and dreams.

Admittedly, it ends up saying more about Kayla than Ivan, but still, kind of amusing.

Thought of the Moment


Considering the odd legal fiction that deems a corporation a 'person' in the eyes of the law, the feature documentary employees a checklist, based on actual diagnostic criteria of the World Health Organization and DSM IV, the standard tool of psychiatrists and psychologists. What emerges is a disturbing diagnosis.

Self-interested, amoral, callous and deceitful, a corporation's operational principles make it anti-social. It breaches social and legal standards to get its way even while it mimics the human qualities of empathy, caring and altruism. It suffers no guilt. Diagnosis: the institutional embodiment of laissez-faire capitalism fully meets the diagnostic criteria of a psychopath.


I think there are big problems with treating corporations as Virtual Persons. Their potential lifespans, for starters, and the way their best interests don't quite match those of the us normal humans...

Link of the Moment
Huh, I'm running a little low on interesting links. One thing I put on last month's loveblender but not here is The Lost Love Project, a collaborative project where people tell their bitesize tales of lost love. Cool visual design and compelling small stories.

Headline and Photo of the Moment

quote
(3 comments)
January 10, 2004
Record setting low temperatures in Boston, . The previous record of was set in 1875. More gist for the mill of idiots who don't realize that what's somewhat-mislabeled as "global warming" is more like "climate instability"...some weather guy was saying this was an odd patern, cold air straight from the north pole, and not down over Siberia-Alaska-Canada. (Random techie note: IE, smart enough to allow line breaks by hyphens, isn't smart enough to disallow line breaks between negative signs and the following numbers without use of <nobr> tags)

Ramble of the Moment
I've been noticing a trend in media design, and I'm trying to find out if it has a name...roughly, it consists of using realistic computer-generated images in iconic ways. For example, some of the imagery certain weather reports use is really amazing, they extrapolate from satellite data and have effects of soaring and zooming into certain regions of the country. And I think the clouds they were showing this one time were real, but then they showed realistic looking snow falling from them, to indicate the affected areas...but when I thought about it, I realized those snow flakes would be the size of small cities. And in this one video game "Knights of the Old Republic", which is a fairly traditional "RPG" (Role Playing Game) with turn-based combat... (i.e. you do your attack while they just stand there, then vice versa) but it looks as if it's playing like a legitimate action game, there's no special battle mode, and overall it looks like a scene from a movie. You can still run around and stuff, though that temporarily drops it out of combat mode.

It's kind of an odd concept, photo-realistic animation being used symbolically. Can anyone think of any other examples of this? Especially old ones...

Manifesto of the Moment
From the geeks point of view, dating is just a problem waiting to be solved.

Quote of an Old Moment


John's going to be freeballin' it in a skirt in my house? Oh good.

During our trip to London, Mo learned that the party John was hosting at our place had a kilt theme. (I'm 'backlog flushing' my Palm Pilot, and I didn't want that little gem to be lost for the ages.)

Continuing the Palm process, I was surprised that "misunderstanding modern art" gets zero hits on Google...well, at least 'til this page gets searched. I'm not sure why I jotted down that phrase in my palmpilot. Maybe it had to do with Damien Hirst's work entitled "Beautiful, cheap, shitty, too easy, anyone can do one, big, motor-driven, roto-heaven, corrupt, trashy, bad art, shite, motivating, captivating, over the sofa, celebrating painting" which I thought should've added a few more lines along the lines of "kiss my ass you poor wankers who make like 1/100th of what I do for this".

from nietzsche the day!

shirtquote
June 22, 2001
Links of the Moment
How False Memories can be Impanted, and How the Brain Edits Out What We See. These are more than mere tricks; I don't think people realize just how subjective their views of the universe are, and how unreliable their own perception can be. 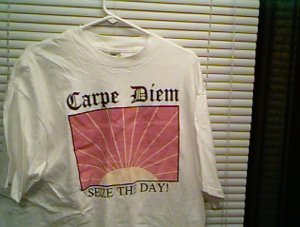 "Carpe Diem". I never liked this shirt, and didn't wear it much. I always thought the slogan was a bit dorky, and adding the translation underneath makes it more so. A lame visual design in colors that don't suit me and the use of an inappropriate font (Gothic? For Latin?) top it off.