tool
My favorite from a series of post-Soviet ruins: 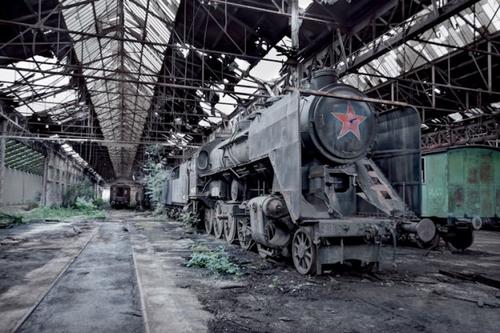 I made Yet Another 7-minute workout guide page This one's gimmick is that it talks more than most, announcing the next exercise, counting down "3 2 1" at the end of intervals, and playing a note at halfway points. More details at my devblog.

My coworkers and I are using it daily!

I divide my officers into four classes; the clever, the lazy, the industrious, and the stupid. Each officer possesses at least two of these qualities. Those who are clever and industrious are fitted for the highest staff appointments. Use can be made of those who are stupid and lazy. The man who is clever and lazy however is for the very highest command; he has the temperament and nerves to deal with all situations. But whoever is stupid and industrious is a menace and must be removed immediately!

tool
This made me laugh.... goldfish crackers for the lazy yet gluttonous:
http://whatshotdjroomba.minus.com/ - "Game of Thrones"-house style banners for NFL teams.

My friend Greg Owen﻿ suggested an "interesting tip calculator" app, and I've made a functional prototype you can run or install as a bookmarklet on your mobile device, from http://stuff.alienbill.com/tip/

So I start with a base rate of 20%, and then look for interesting stuff +/- 5% of that, and then display the results in sorted order, so you can either pick based on whimsy or by being a bit more or less generous

I wrote up some of the technical details at kirkdev.blogspot.com

If people dig it I might push on a more configurable app-ish version. Brady took a paycut for this?

tool
(6 comments)
April 30, 2009
One of my great pleasures as a professional programmer is when I come up with an idea for a cleverish tool that makes someone else's life better, and am able to implement it in a hurry. This little "colorfade" script does just that, giving you the rgb hex values for fading a color into white, black, or any other color. I'm sure it's been done, but hey, I like it.

For a nice sky effect, bump "# of steps" up to 100.
http://www.slate.com/id/2217147/ - Golden Girls as an underrated sitcom. My friend Jane mentioned that she finds Twitter as a bit isolating. It got me thinking to how it compares to say Facebook, which I've been noticing seems much better at fostering feedback (which attention whores like me so crave.) I think some of its a semi-technical/semi-social aspect of how FB invites others to comment on everything, and other people can see those comments... in comparison, Twitter is people shouting (sometimes directed at each other) from their little fiefdoms, even though all the shouts get aggregated.

I think Slashdot was a similar social/technical win, with people's comments on a story showing up in a big public common area, 1 click away from the very front page.

Kate pointed out that Twitter is badly in need of a conversational threading model - some of its competitors have that, but that's not enough to overcome Twitter's early mindshare lead.

I'm worried that this site isn't as engaging as it was, that the "some ramble thought followed by 2 or 3 items with text" format was a bit superior, but the Twitterish/Tumblr-ish hybrid approach really is more true to what I was doing back on the Palm in the 90s. It also fits more easily into a busy life. I want to market an extra-rough brand of kleenex called "grindstone". Word of the moment: pulchritudinous (hint it doesn't sound like what it is) Working with size limits of company logos at work, I'm amused to think of H+R Block's logo as a single green pixel stretched . Attn Paul McCartney: because even if "no one really watching us", the road is still dirty and uncomfortably firm and gravel-y! Duh.

[Ford Prefect] started to count to ten. He was desperately worried that one day sentient life forms would forget how to do this. Only by counting could humans demonstrate their independence of computers.

In my absolute lack of struggle to prevent this, and to make the whole Google is Making Us Dumber crowd cluck their tongues, and to also remind me what side of the street I need to park on on Mondays to avoid getting towed because of street cleaning, I made a webpage that I can quickly consult on my iPhone that says the following: The fact is the course of action to be derived from the rule "April through November, avoid parking on the left on the first and third Mondays, and avoid parking on the right on the second and fourth Mondays" is not always immediately obvious... What's today's date? How long 'til the next Monday? Which Monday of the month is that? Which side is which again? Trying to calculate that in your head on a narrow one way street, possibly blocking cars behind you, with the relevant No Parking signs at various levels of visibility... I'd rather be able to press 2 buttons and get a clearly worded answer.

I thought about making a UI for this, to let people enter and store their own parking restrictions, but meh, unless there's a sudden clamor for it, which I doubt. (If someone else would find it useful I'd be delighted to host a customized page for them that they can bookmark for rapid consultation!)

(If I had a mac setup to synch with my iPhone I would try and make a "bookmarklet" out of this code, thus not needing any connectivity at all.)

Actually, going back to the Douglas Adams wikiquote page to find the wording of the thing about counting to ten, I may have found an even more appropriate quote:

I am rarely happier than when spending an entire day programming my computer to perform automatically a task that it would otherwise take me a good ten seconds to do by hand.

Computers: they think so we don't have to!

from livin' for the weekend

tool
(2 comments)
June 19, 2005
Information Toy of the Moment
Just an enhancement of a script I made a while ago, this tells you the day-of-the-week for a given date for a series of years rather than just one year. Mostly I wanted to see for what years my birthday was going to fall on a weekend...