yowza
June 12, 2001
Ever wonder why popcorn is the appointed "king of all snackfoods" at the cinema? I mean that stuff can be loud if it's a thoughtful movie.

A supremely stupid movie, but a point that might not be as trite as it sounds. I also saw that Charlie's Angels remake last night. I admired it for being so aggressively stupid. I admire the song "It's Raining Men" ('Cos tonight for the first time / At just about half past ten / For the first time in history / It's gonna start raining men) for the same reason.

Art of the Moment
From an article on the artist Jan Saudek at Salon... I just wanted to say this is about the sexiest picture I have ever seen: 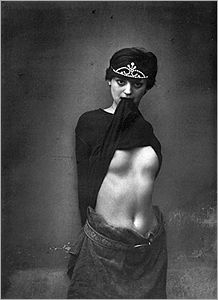 I like the artist profiles Salon has. A suspicious number of them involve skin. But sex and art go hand in hand (so to speak) these days. I think. In any case, both are good to look at.