shirts
June 24, 2001
Wow. Last night was the combined bachelor/bachelorette party for Mo and I. That's probably the reason this entry's gonna be a little sparse... we started the evening at Lee and MZ's for cocktails, and then went en masse to Jasper White's Summer Shack for seafood and more. We then took the T downtown and went to see Jacque's Cabaret... the place in Boston for some pretty amazing cross-dressing lipsynchers. It was a fun time, Mo and I got some attention from the ladies there in honor of our soon to be wed status. Finally we finsished up with an hour or two at the club Man Ray. Let's see... we got to Lee and MZ's about 5:30, closed the joint at Man Ray's at 2... man, that's over 8 hours of celebration, a solid work day. Whew, no wonder I'm tired.

Surprsingly, I'm not sure if even this shindig has really 'brought home' the fact I'm going to be getting married in a week.

from the T-shirt Archive: #4 of a Series 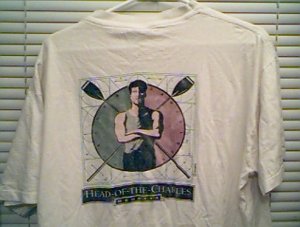 "Head of the Charles". If I had to guess, I'd say I got this when my jazz band came to Boston, all the way from Cleveland. That was the fateful trip I first started flirting with Veronika, Spring of 1991. For obvious reasons it was a cooler shirt to wear in Cleveland than in Boston, but still, it had a nice design.

This was actually a very moving line; the golem was trying to weakly defend himself from a rampaging mob, crouched behind the slate it uses to 'talk' with. The golems are odd creations, not alive, not even undead; tireless speechless workers, clay given life by the mystical words written on paper in their heads. As the slate is smashed, one of the mob yells "Money? That's all you things think about!", and the heroic Captain Carrot steps into stop the next hammer blow, saying "Money is all you can think about when all you have is a price."

It sounds odd, but it was quite well done.