shirt
July 27, 2001
Weird. Feeling very vaguely short of breath. Not desperately so, but in a way that makes me want to breathe deeply every 10 minutes ot so. Hmmm, should I be worried?

As Hosed As You Think You Are
Interesting page on PsyOps, the art of psychological warfare, or rather psychology during warfare. Dropping pamphlets, radio broadcasts, etc. I especially like the material about the Gulf War, especially the sample pamphlets. (This kind of thing probably had a big effect on the huge number of bloodless surrenders.)

Yet Another Geek Quote


My latest idea is for a beat-em-up game in the Mortal Wombat vein called Friedrich Nietzsche's Art Of Fighting. The player basically has two kinds of attacks: the first attack will actually increase your opponent's health bar, while the second will kill the opponent instantly no matter how strong he or she is. Thus, whatever doesn't kill you makes you stronger, in every possible sense. I'm sure there's a market for it.

from the T-shirt Archive: #10 of a Series 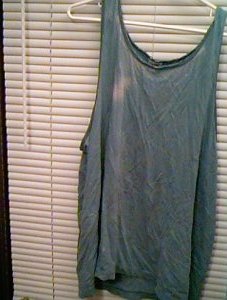 Ratty and faded but beloved blue tanktop. Odd discoloration from too many washings. I think it had some kind of design on the front, like a kayaker, but that went away. Not up to my usual "interesting shirt" standards, but I liked it a lot, and prevented my mom from chucking it many times during high school.