shirt
August 8, 2001
Ok, it's really hot. I grant you that. It's too hot. Dangerously hot for some people. But what the hell is it with us and heat indices? C'mon, we can't say it's "95 degrees and humid", we need to pretend it can be mapped to a number? It's like windchill. We all feel much more macho when the windchills way down there "Sure it was thirty degrees, but with the windchill factor, it was like 10 or something!". These numbers aren't as reliable as people assume anyway, based on unreliable assumptions about heating and cooling.

Your New Best Friend
Read about this in a Wall Street Journal Marketplace someone left in the company kitchen... if you run AOL Instant Messenger, try chatting with SmarterChild, a news-stocks-weather-games-etc chatbot. It's an interesting concept in UI. Ranjit mentioned that the now defunct word.com was thinking about having an alternate frontpage chatbot interface, but the company tanked before he had to implement it.

Online chat is kind of cool, a great testing ground for AI and the Turing Test, since 1. Typing speed and the like can't be a give away and 2. It's awash in semi-literate goofballs anyway.

Salon Story of the Moment
Man, why can't I get Spam that's this well written?

from the T-shirt Archive: #13 of a Series 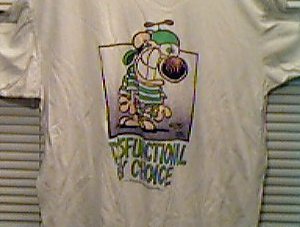 "Disfunctional by Choice". Grimm from Mother Goose & Grimm Oh jeez. Always strongly disliked this shirt, part of my general disregard for the general sentiment of "Hey look at me! I'm wacky!" My mom got it for me before she got handle on what kind of T-shirts I liked and disliked. (In general, I don't like well-known cartoon character shirts, though Bill the Cat was my first post-surfing-t-shirt I had.)