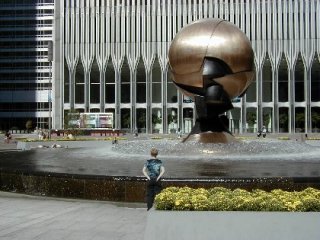 This is (the back of) Mo standing in front of the fountain at the World Trade Center plaza, taken September 11, 1999, two years (to the day) before the tragedy.

I liked that fountain very much. I once got the chance to look down on it, from about halfway up the tower, three years earlier when I was on assignment for Barron's Online. It was the most interesting thing to look at from that height... water poured from the center circle onto the larger circle. All around the outside border of the inner circle it looked a bit like a boat's wake (you can make out the 'wake' in the picture), giving the illusion that the inner circle's edge was constantly moving inward. But of course it was remaining the same size, thus confounding the eye. It was a great piece of art, now ruined. That pales in comparison to the rest of the tragedy, but that's my attempt to connect to what has happened.

Update 2002.02.25: I moved a thumbnail and link to this page to kisrael.com's front page. The image shows up on the second page of Google image search for "WTC", but the resulting "in context" link is to the site's front page.

Image Gallery
The pictures from Tuesday were horrifying, but for some reason these images of the citizens of other countries sharing our grief really moved me. (Update: parts two, three and four)

A Lighter Note
Brunching.com has An Open Letter To Dorks and Losers, exploding the myths of bullydom, like "they'll back down if you stand up to them". It's very funny and rings very true.