Last night Mo and I went with Mike and Dave to Rudy's and then to Boston Billiard Club...it was fun, but pretty expensive... I guess the waitresses in the short black dresses and knee high boots shoulda been a give away. Our waitress was pretty amazing, with a body right out of the more realistically drawn R. Crumb cartoons...actually not too far from Devil Girl.

Political Quote of the Moment


But I think the deepest reason for this divergence is a simple lack of power. The awful thing about becoming a second-rank power is that you discover that foreign affairs involves dealing with foreigners, and taking seriously their absurd ideas about the world. This is something which America has yet to learn.

Link of the Moment
A fun little read, A Letter To My Younger Self, where 42 year old Brian Elroy McKinley writes to his 14 year old incarnation. If only we all could do something like this! (Of course, if everyone told their younger selves to "buy microsoft stock" and so on, the markets would get pretty darn weird.) 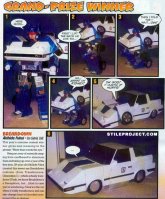 Click for Original
On stileproject.com (a rather raunchy R-rated site), an unusually innocent image of a guy who made himself a transformer costume...that actually (more or less) transforms. Akihide Fukui from California made it...amazing in more ways than one.