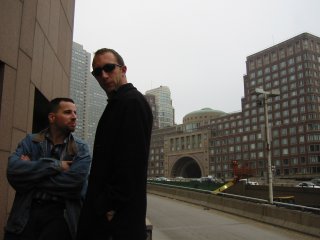 Mike and Dave from this weekend. In the background is that neat building with big arch, between 93 and the harbor.

We went on the subway this weekend. I've always been struck by these two signs: They say basically the same thing, but it always struck me how much more concise the English version was than the Spanish. On the other hand, certain other phrases, especially involving verbs and recipients of action, are much tighter in Spanish. That plus the smaller selection of word ending sounds probably is what makes for better poetry. But English seems good at the nouns.

Link of the Moment
There has been 4 of 5 cartoons in the What The Drugs Taught Me series up for a while, don't know if the fifth one is ever going to show up. (UPDATE: Here's the Final Cartoon) I like the narrator's mom's rule, a two year statute of limitations, after that you can admit anything and she can't get bad. (Other favorite quote: "Maybe everything I've been told is bad... is good!" Such a goofy sophomoric way of looking at the world.)