historyfamily
April 1, 2002
Aargh, I was saving this for my birthday, and then forgot about it! So rather than subject my audience to some lame April Fool's joke (or waiting another whole year) I'll post this today. (Which reminds me of how my dad used to torment me by saying had I been born one day later, they would have named be "Foolsbert". Or "Foolella", had I turned out to have been a girl.) 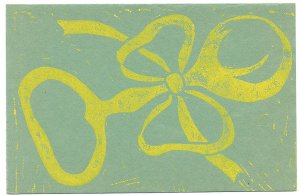 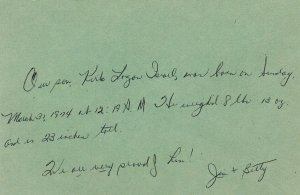 Late this winter my Aunt Ruth was cleaning out the house she and my grandmother had shared, and in the cabinet she found a collection of clippings about me that Grandma had saved...some old newspaper articles for the most part. The most interesting thing to me was the birth announcement my parents had sent them. It was in remarkably pristine condition 28 years later. It was really cool to see, and nice to have. My mom had this to say on it:

You may have already known, but just in case not, your dad made those birth announcements. He carved the rattle design in a block, and using a breyer, printed them all. He chose green and yellow, because this was in the days before the common use of pre-natal sonograms and we didn't know whether you'd be a boy or a girl ahead of time. He wanted them done before you were actually born. I can still see them spread out all over our office floor in our apartment at Ivy House in Philadelphia as the paint dried.

[Ivy House was a home for disadvantaged youth my parent's were in charge of for a while.]

You'll note we said you were "23 inches tall" - that's because Dad thought any newborn so close to two feet at birth deserved 'tall' rather than the traditional description of 'long'.

Actually, I hadn't realized that it wasn't professionally made. Oddly, the gene to make such neat handcrafted pieces has skipped me entirely, and made it to my wife, who made our wedding invitations, among other things.