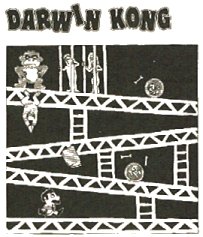 Insert your token and you'll see Adam and Eve who are about to be evolved into bananas by the angry monkey at the top. You must take quick action. You are a dedicated Christian Creationist at the bottom of the screen who must carefully climb the archaeological ladder and rescue the desperate couple up above. You must avoid secular humanists, textbooks, barrels of supposedly prehistoric fossils, evil paleontologists, and the entire United States Supreme Court. When the going gets tough, just press the "lawsuit" button which allows you to jump over obstacles and make it to the top. If after three tries you are unsuccessful, stop playing this game and move to game entitled "Christian School".
--From a 1982 "Wittenburg Door" feature, Christian Video Arcade. This magazine (now just The Door) is a Christian satire magazine that I've always respected. I finally webified this article from an issue I've been keeping around all these years, mostly because I liked the faked screenshots and font play.

"Three years ago I took that HTML course and I was on top of the world--now look at me."

I guess the hope is that some of the people who were johnny-come-latelies to the tech world with the dotcom explosion have been pushed back to their preboom careers. I kind of console myself that think I'm doing what I'd be doing even there never had been an Internet boom, though obviously it's treated be better than nonboom years would have.