the pitfalls of videogaming

April 29, 2002
So I went to the video game conference, and it was pretty good. Christian, the guy I drove down with, turned out to be very good company. (He's much more of a collector than I am, with an astounding gameroom, and he's also a chef, which is a bit unusual for this hobby.)

The convention was...well, mostly it was a great big room, with many tables of video game goodness for sale, trade, and display, and very few "Don't Touch" signs. Many console game setups, but the highlight was the far corner with a few dozen fullsize Arcade machines rigged for free play...a great little stroll down memory lane. 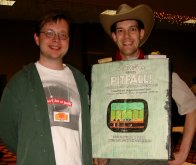 It's interesting to be so close to people who are really into this hobby...I felt like a piker. Like this guy, Alan Hewston. He's dressed up as Pitfall Harry (the cartoon version). And as a Pitfall cartridge. It's a bit of a mixed metaphor really, but wow: that's dedication. I didn't buy much there: a Dreamcast game that was a bit cheaper than usual, and two videogame books, both purchased directly from the author there.
Quote of the Moment


Q: What would you say to people today who may not know who you are?
A: I would just say that they're really lucky to be able to play some of the neat stuff they have now, instead of the cheap stuff we had then.

Bushnell was the founder of Atari, the maker of the first Pong arcade machine. Or as he says in the same interview, "I think I was the guy who started it two years earlier than it would have been started without me".

Link of the Moment
Guess this is as good a time as any (and better than most) to post this older link, The Church of the Burgertime. It's difficult to judge how seriously it's taking itself, actually.