(2 comments)
February 21, 2003
News of the Moment
One (in my opinion under-reported) recent news item was a plane crash in Iran that killed 302 members of Iran's elite Revolutionary Guards. Between that and the Pakistan Air Force chief dying in a plane crash, I bet the Arab rumor mill is bustling. Of course in the former case, they do blame the USA, the embargo we placed on them after they took over our embassy in 1979 preventing them from getting new planes and parts. (But you know...is it reasonable for them to reject the West and its values and still want our airplanes?) 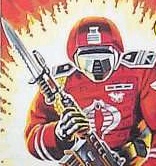 But you know, that's not the reason I'm posting this. Mostly, I'm just greatly amused by the phrase "Iran's elite Revolutionary Guards"--which brings to mind one of my favorite GI Joes, COBRA's elite Crimson Guards! Man, they were so cool. The writeup is from Mike's G.I. Joe Page...that page's "Forgotten Figures" and "Guest Section" are good reads in a nostalgic way...even though Transformers were more my thing, I had my share of Joes. That site is pretty hard core though... "The 93 version, with yellow pants, was a horrible revision so avoid this one at all costs", that kind of thing. Plus, these guys sound like they still play with them, or maybe they just make those dioramas or something. (And of course, they're way too cool to like "Snakeyes"...remember him, the mute ninja dude?)

I guess Iraq's "Elite Republican Guard" is just about as bad.

Onion of the Moment


"The Euclid fire appears to be an isolated incident unrelated to terrorism," Bush said. "But next time, we might not be so lucky. That is why we, as a nation, must do everything we can to drive out Saddam Hussein and his ilk. By confronting terrorism head-on, we can once again live in a nation where we don't jump every time a dryer buzzer goes off."

Also, the latest AV Club has an interview with Dave Attell (from Insomniac...) I was disillusioned to find out they film in one city over the course of several nights, not just one night into the wee hours. Still, I love that show, just wandering around and drinking and seeing what people do at night.