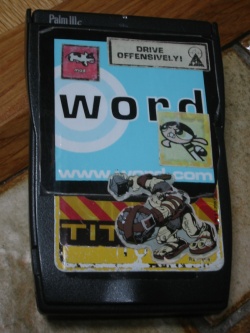 So I'm finally retiring the old Palm IIIc. Actually, it's Mo's old IIIc, she generously let me use the one she got when mine when on the fritz. I got the IIIc January 2001, though you can see be jonesing for something new a few days before. Wow...when I got that IIIc, I was still at my dot bomb!

Anyway, the IIIc was always a bit wider and longer than I liked, so I took to decorating its case with stickers, you can see the last rendition here on the left. I liked how the stickers piled up over the years.

UPDATE: Heheheheh. I carried this Palm with roughly that group of stickers for months, and only after having that picture posted for 10 hours do I notice the way the Small Soldiers Ogre's boulder turns the TITAN A.E. into "TIT". My inner 12-year-old must've been asleep!

Its replacement is a Sony Clié SJ22. I've kind of warmed up to it now that I see it's styling as a bit iBook-ish, but man, is this thing girly: But anyway. I think it's the cheapest PalmOS PDA out there with a 320x320 screen, which makes the pixels really tiny and the text look really nice. Plus you can read it in daylight, unlike the IIIc. (And the stylus isn't falling out all over the place, unlike my IIIc) It's not perfect as a doodle pad, it tends to jump a bit when reading the pen, but overall I'm secure enough in my manhood to be very happy with it. In fact, it probably is attractive enough that I'm not tempted to subvert it with stickers.

I know it might be odd to write this much about a piece of hardware, but I've had a PalmOS device with me ever since fall of 1997, so it's an important accompanist to my brain...

Invention of the Moment
Call me gadget-happy, but I think I'd really like to get one of those high-tech toilets Wired is writing about.

Prank of the Moment
ZUG has fun with credit card receipt signatures. I liked the surrealness of some of them.

I haven't thought about ZUG in a long time. I love how it informs you that "You're reading ZUG, the world's only comedy site."