I'm Steve Stevenson for the daily channel 192 news. Tonight, in a related story we brought to you yesturday, the sun has once again tried to destroy the earth. The sun claims that "we were in the way" and stated "when ya gotta go, ya gotta go..."

President George W. Bush commented on the topic claiming that the sun may be in league with known terrorist group Al-Queda. President Bush attempted to stare down the sun in a show of bravery when his eyes were severely burned due to over exposure to UV rays without blinking. Later on today, President Bush will be launching a "Shock and Awe campaign" directed towards the sun to send the message that the United States does not deal with terrorists...

Also, DogIsMyCoprocessor pointed out that maybe it's time we give up on Allah, Jesus, Buddha, etc, and go back to the Sun Gods, 'cause clearly they're getting a bit ticked...

Advertisement of the Moment
This is quite the ad for gum. I have never been so disturbed by nipples on a guy.

Halloween Costume and Lyrics and Phoon of the Moment 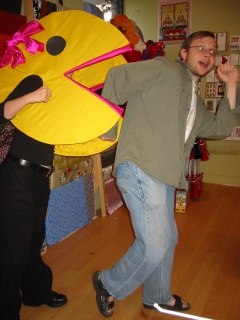 I think I love you,
Ms. Pac-Man.
I know your boyfriend.
What do you see in him?
He is round & yellow.
Look at me--I am sexy and trim!

Man, that was a great Comedy Central show.

Anyway, I ment Ms. Pac-Man at that paper store between Porter and Harvard Square.

Incidentally, my pose is a 'phoon'--I've been meaning to write up that odd genre of "capturing the running action" photos, but wanted to make up an example first. Here you go, then!