funnyfav
May 23, 2004
Started getting into semi-serious packing yesterday. I'm moving June 7th. And I've come to realize that living in an echo-y boxed up house is a good way of disconnecting, or at least marking the transition.

I skipped a morning shower yesterday, partially out of laziness, partially because...well, frankly, I just love the way my skin smells after I've spent a day slathered in SPF30, walking around in the sun. Some combination of light sweat and the chemicals all baked together, or something. It doesn't work with all brands, but a lot of 'em, including Banana Boat Sport, the one I bought the other day. It so taps into all these great old memories I have of going to amusement parks with my high school friends, flirting and riding rides and having a great time. Also summers working with mentally handicapped kids at the Catholic Diocese daycamp, which had its own kind of satisfactions.

Some of the sweetest and most nostalgic times I've had were riding back from Cedar Point, Mike driving with his gal pal in the front, me snuggling and sneaking kisses with my romantic interest in the back. Well, not always that sneaky. Our favorite tape to put in was the soundtrack to the Blues Brothers movie, on the portable tape player Mike used since his car (the 'Mikeymobile', a kind of aged Chevy Citation) didn't have its own stereo.

But anyway, getting back to the smell...I really love it. I mean...it's all I could do not to jam my nose on my shoulder and just stay there for hours, breathing deeply.


"I could spend the time to sort this crap out properly. But I'd rather send a message to my future self. That message is 'F*** you, YOU sort it out, I'm busy.'" [begins dumping stuff from closet into cardboard box.]
"Yeah, but didn't you already kind of do that to yourself, that's why it's in this state now?"
"Nah. That wasn't me, that was my past self. He was a real prick."

Photos of the Moment
The "Mind Eraser" at Six Flags New England on Friday: 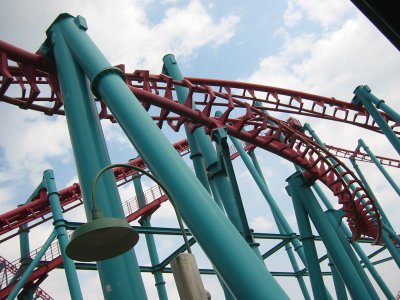 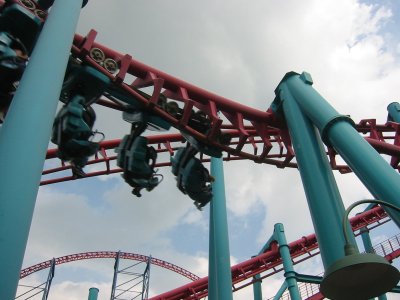 Censorship of the Moment
The poems being censored for being "un-American" is one of the most jaw-dropping stories I've read this week. As Bill the Splut put it, "What's the Eternal War on Terror about again? Oh, right, they hate freedom."

I'm grimly amused by the idea that via Chalabi, Iran played the USA like a bad violin, that they got their #1 foe (US, ala the Great Satan) to take out their #2 foe Saddam.