back from the land

history
(8 comments)
July 7, 2004
So, I'm back from Cleveland. I realized that most of the photos I took wouldn't be of such wide interest to most of the kisrael crowd, so I decided to be a little selective.

Now, I almost hesitate to post this in case someone gets the idea that Cleveland is less urban or urbane than it actually is. In general, I guess it runs a bit on the conservative side, at least relative to us here in Taxachussetstan. Still, I was strucky by this Jeep rear window:

Two Irish flag decals plus an American flag with "No Vacancy" over it. Now, I'm more or less ok with a strong devotion to ethnic heritage even though I'm just a WASP-mutt, but do you think this person has a deep understanding of the history of Irish-American immigration, and the way the rest of the country responded to it at the time?

Anyway, in more amusing topics, we threw Mike a birthday party. Here he is wearing a mask with the eyeholes blacked out and his special birthday crown: 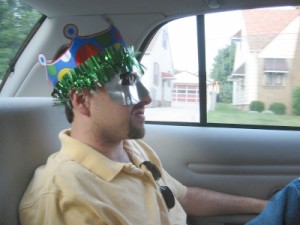 Dialog of the Moment


"I've got a mask on that's duct-taped to my face, I'm wearing a silly hat, I've got a wand in one hand, a beer in the other, and I've got explosives in my pocket."
"That sounds like a perfect evening."