(1 comment)
July 20, 2004
Did any of my buddies who were over recently leave a black Medium Old Navy nylon-y light jacket in my living room? I have no idea whose it is. (Though I like how the label says "for best results, wear with another article of Old Navy clothing".)

Japan of the Moment
My friend Josh is with his Japanese fiancee T. in Tokyo and writes:

The attached picture is a one-person car, or a futurized motorcycle that Toyota will unveil in about two years. 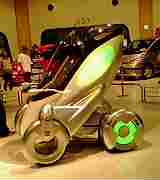 It is basically a reclining chair in a pod that has for wheels and is operated not by a steering wheel but by two joysticks. In park and for local driving the driver is situated up at about a 70 degree angle. For longer drives the angle goes to about twenty degrees and the driver is aided by sensors,cameras, and auto-pilot functions that prevent accidents. For highway driving the driving pod is flat and the driver cedes controls to the GPS system and the sensors.

We saw a limited demo and it was cool. But, I wonder if it is too impractical for actual use. It is good for single commuters, though, and would be good for situation similar to motorcycles today. It certainly is much safer than a motorcycle.

The other car we saw adjusts the chair and mirrors for the driver when the driver sits down in the seat. It can remember three people and even sets the radio, GPS, and TV as the driver preprogrammed them.

My thoughts were I hope those are good sensors, because I certainly wouldn't trust the GPS unit I have for my car quite that much...also...TV, huh? Well, I guess if the computer's driving...I really wish we could get autodriving cars so I could read a nice book on the way to work. I think it's a long way off, especially for this country.

Online Game of the Moment

Two different friends have recommended checking out The Kingdom of Loathing, a simple web-based RPG game w/ lots of amusingly sketchy graphics. (A bit like the doodles I posted the other day.) I haven't played it enough to get to much interaction with other players, so it hasn't been that exciting, and it has a lot of leveling up "grinding" (just click click click click click to get through little adventures and build up your character's stats) but much of it is fairly amusing--the What Is The Kingdom of Loathing page is worth reading through if you just want a taste.

Journal of the Moment
I was reading about Lance Armstrong taking the leader's yellow jersey back in the Tour de France, and they mentioned he as a strong supporting team, including fellow American Floyd Landis. For some reason, I always have more affection for supporting cast than for the stars, just the workmanlike way they go about kicking butt and living through triumphs and defeats everyone else hardly ever hears about, so I found Landis' journal at CyclingNews.com to make for some interesting reading.