October 14, 2004
Dang it...with Curt Schilling hurt, the Red Sox offense picked a damn poor time to get themselves into a one hit funk. I remember one time after a Patriots' game when Brady said "sometimes the defense carries the offense, sometimes the offense carries the defense". (After he threw his way out of a jam that the the D had gotten them into in a high scoring game.) But it always takes some of both...last night the pitching held its own, but the bats just weren't there.

Personal Triumph of the Moment
Last night in yoga class I did an honest-to-goodness handstand...I'd only tried it once before during a previous 10-week session and it didn't go so well, but last night I got it done with relative ease. (I think part of the trick is when you're bent in half, ready to push off (hands on the ground,one leg bent for springiness, the other straight to haul up) is to keep your feet close to your hands, so there's less rotational inertia....that was my instructor's advice, and he said I managed to do it nice and lightly, rather than slamming full force into the wall I was against.) By chance I was directly across from the yoga room's small mirror, so I could totally see my moment of triumph. Fun! 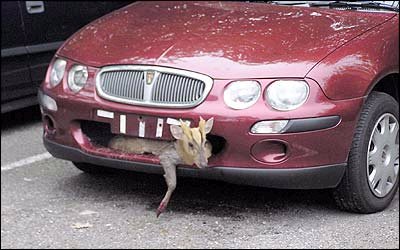 --This deer survived a 25 mile trip caught in the bumper of a Britsh driver's Rover with only a few cuts and bruises. (via autoblog)

Link of the Moment
Drug Smugglers Do The Craziest Things...some really clever bits of engineering to pack these things away.