(3 comments)
November 11, 2004
Man, my apartment is chilly. During the summer it was great, it's relatively shaded location kept in nice and temperate, but of course now it's time to pay the piper. It also seems a little drafty...I'm such a household moron...I checked and it doesn't look like there are any kind of non-screen sections to pull down, it's just the screens from the summer. So assuming there aren't any storm windows the landlords expect me to know about in the basement...maybe I should talk to him.

But assuming what I see is what I got (and that I'm seeing it correctly, and there isn't some non-screen extra layer lurking in those windows), I wonder what would be good to make my place warmer and less drafty. I know some people who put up a layer of plastic, basically clingwrap, which I'm sure is warm but looks terrible. Maybe some heavy curtains? Which might also help deal with the "too much light" problem--in my bedroom when I'm trying to sleep-in, and then again if I get that video projector I'm jonesing for...


A woman has got to love a bad man once or twice in her life to be thankful for a good one.

Map of the Moment 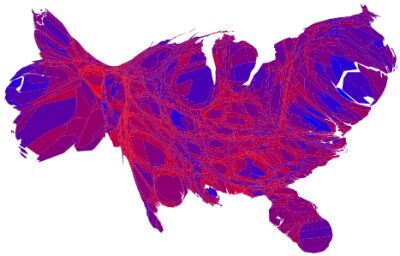 --One nation, Red and Blue and Purple all over. E. pointed me to these election results, blended red and blue by county, with each state warped so that its size reflects the number of votes cast. The page this image came from has some other diagrams that kind of build up to this one.