tech
(12 comments)
December 13, 2004
So I was probably a bit remiss, or at least out of character, in not talking about the latest addition to my consumer electronic life, an InFocus ScreenPlay 4800 video projector. An early holiday gift to myself. It replaced the old 36" Buddha TV, which I sold to Sawers for a song. I went for a bundled deal at CostCo, that came with a seperate screen to project onto, though in retrospect that might've been a mistake, because I didn't fully research it (though it ended up being a solid choice) and the screen it came with, one of those roll-out pulldown jobbies, is too small...they cheaped out and made it so it only rolls down so the whole thing is 16:9 "widescreen" format, but of course a lot of what I do (video games and, more rarely, watching TV) is standard 4:3. So here's what it looks like, you can see for now I often let the picture 'bleed' off of the top and bottom of the screen... 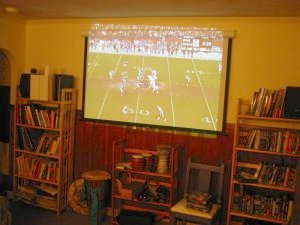 It's probably hard to judge from that photo, but the image is pretty dang big...much bigger than any flat panel or regular TV I could hope to afford, and unlike the TV it replaced, the projector doesn't outweigh me, all for...I dunno, $1200 maybe? Plus the too many cables I let Evil Bastard (who was a great help in the whole shopping and installation process) talk me into.

Also, I decided to buy a stereo receiver rather than juy rigging some frankenstereo. This is what my A/V stack of receiver, DVD, VCR (mostly need because I don't have a cable box) and projector looks like, along side my big comfy chair: 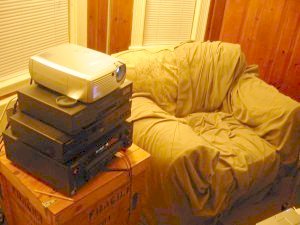 You know, I have mixed feelings about that stereo receiver. It's fancy enough that the volume control is "virtual"...turning the physical knob makes the volume readout change, but it's annoying because you can't just give it a quick twist to turn it all the way down, and in general you have to turn it too much to affect major changes. Also, it gives you the "true" volume reading in dB, which is extra annoying, since that's a negative number that unintuitively looks like it gets smaller as the volume increases. Way too much audiophile wankery for my taste, or for the recycled speakers I'm using with it.

So there are some drawbacks, but if you have a long enough room (you need maybe 12-14 feet from the projector to the screen) that you can make dark you can get a great big picture for relatively cheap. FoSO mentioned that someone they know conducted some tests, and Tyvek (a building material) reflects a big percentage of the light, so you can get a decent picture by stretching Tyvek over a wooden frame. I might try that if I continue to be annoyed by the current screen not making good use of the available wallspace.

So I guess those are three not-too-too expensive electronic luxuries (under $1K for each, if you're frugal) I'd recommend to anyone: a video projector, an car GPS navigation system, and a small laptop for the living room (and a now-dirt-cheap wireless network to run it on.) These are along the neccesities of electronic life, all of which can be had for like $100 each: a palm pilot, a digital camera, and a cellphone.

Product Imitates Imagination of the Moment
Weird...just the other day I was thinking about chastity belts (and how much they might chafe) when I had the idea that the whole "WWJD"/abstinence-only teen movement should make up special chastity panties with a symbolic lock and key imprinted on them. I even came up with the perfect name for them: "Undies for Fundies". It turns out the product basically exists, available at Target at Blue Q Chastity Underwear. (I guess there's a small chance I heard about these earlier and forgot about 'em, but as far as I remember I was really just mentally riffing on old school chastity belts.)