the hand that builds the cradle

Lego! It's the best thing in the world!

That's about it, really. Lego is t3h r0x0rz. A quick straw poll of my housemates has shown that they would try and make, say, the walls one colour and the roof another, and get all the colours aligned - but one housemate says that he'd look at what he had and try to make something out of that, so the question never really came up. I wasn't that bothered about the colours, myself...it was the creativity that mattered more.

And modern Lego is awful, all premoulded into set shapes. It's like DRM for kids (Sort of. Maybe.)
--Catherine
(8 comments)
April 19, 2005
Project of the Moment
Lately I've been lax in charging my cellphone, and I realized that that might partially be due to not having a "cradle" for it...it seems like a small thing but being able to plop a phone into a handy little throne for it is a lot easier than fiddling with a wire and plug. So I thought I'd haul out my legos, too long dormant, and get buildin', just a kind of wrapper for the wire I already had.

This is what the table I dumped my Lego bin onto on looks like. I do have a lot of Legos. It looks more impressive in real life, I think, because it's a deep layer for pretty much the whole thing. This is one of the first times I decided to go with a table top as work space rather than the traditional floor...it might've been a mistake. Legos are falling off in all directions. 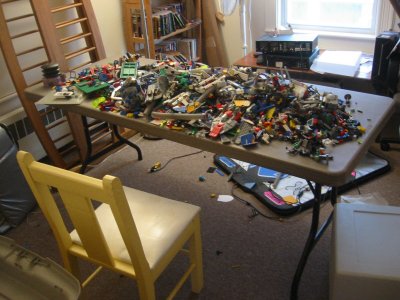 Close up of the pile, meant to give a slightly better sense of scale... 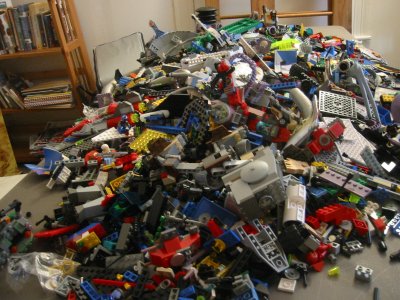 Here's the final result. Bigger and clunkier than I envisioned, but I was so happy to get something that seemed structurally sound while still allowing for easy connection and disconnection of the phone and the little plug that I don't want to give it another go. I didn't spend too much time on aesthetics but did add a few frills at the end. 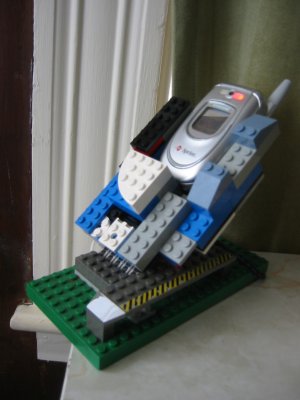 Man, I almost hate to say it, but it actually feels like I might have "too many Legos". It was tougher than I remember to find the pieces I was after, though maybe I'm just out of practice. I think Legos meant more to be as a 3D modelling tool before computers and video games could render 3D images with no problem.
By the way, I'm sure there are Lego lawyers who wish I would call them "Lego bricks" rather than "Legos". Well, nyah, that's not how Lego works, but as long as you keep your quality edge you can still have your niche over junk like Mega Blox even if your name gets "Kleenexed/Xeroxed".