So, you may have noticed we had a general election, and that Labour got back in.(I stayed awake till 5am watching the results come in :-) ) All told this is I think the best possible result in the circumstances - no-one wanted to see the right wing Conservatives get back in and while we may love them dearly, also no-one really believes the Lib Dems (traditionally moderate, currently most left wing) would have half a clue of what to do in government - the Liberals haven't won an election since 1929.

In general everyone really wanted Labour to get back in, despite the fact Tony Blair clearly lied to the country about the war and then tried to cover it up in a really clumsy way - but the many protest votes for other parties has given our Tony a greatly reduced majority, which is what he sorely needed. Perhaps he'll take opposition seriously now?

Being a crazy young hep cat, I voted (could have doen twice, having been given two different poll cards *for the same city*) and would never not have done - but there's been fierce debate among my friends about why you should at the very least spoil your paper rather than not voting at all. And I'm pleased to say a few people went to vote for the first time on the strength of this. Hurray!
--Catherine
(6 comments)
(4 comments)
May 6, 2005
So last night Ksenia and I got to use some tickets to the Boston Ballet's production of "The Sleeping Beauty" that my Aunt and Uncle decided not to use. A few observations on ballet:

1. The show was more poorly attended than I would have guessed... I'm not sure if that's because it was opening night, and a Thursday, or if ballet is just losing out in popularity, but the place was half empty, and we were easily able to upgrade our seats on the mezzanine.

2. For all its strength and gracefulness (and I'm sure I'm badly underestimating how difficult of most of it) ballet has a large amount of somewhat clunky looking moments and poses to set up the graceful ones.

3. A few times one of the ballerinas had serious problems with squeaky shoes. That made me giggle. Plus, there were times when the clatter of feet of a group of dancers sounded like a stampede.

4. Ballet is kind of funny, it's such a set ritual and tradition...I should look into the history of it. I can see why so many little girls aspire to it, how the whole places focuses on the one lady in the lovely outfit as she dances gracefully, but I also get the sense it's a hell of a tough calling. (At my mom's old job, they split a cafeteria with a ballet school...it was kind of weird seeing all those ballerinas-in-training, with that distinctive look and styled hair, en masse. I didn't notice if their eating habits were notably light.) 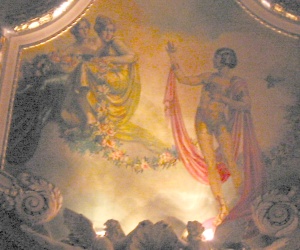 Anyway, I made a joke that I thought was really funny, but pretty obscure, and unfortunately the photo of the mural that sets it up is too tough to see...but I tried to figure out who the rightmost figure reminded me of, an athletic body in an oddly modern-sports-gear looking outfit, but with a 40s/50s woman's "power haircut"...and I realized...my gosh, this is a mural from the Church of Ayn Rand!

Sigh. I guess you have to see it for yourself...it's above the left side of the mezzanine of The Wang Theater.

(Incidentally, The Wang Theater is just a goofy name on two levels, the obvious sexual joke, and it's such a modern name for a place with almost over-the-top gilded columns and artwork.)