As a "business traveller" geek, I've started to go a bit crazy with the gadgets and gizmos, not to mention the other assorted junk. Here's what I brought with me this trip:

In my pockets:In my courier bag:
Yeesh!
--Kirk
(5 comments)
(6 comments)
February 28, 2006
I didn't get to see much of DC... a lot of the attractions close in the evening, and I didn't want to sick around for a weekend. But one night we did go down to Georgetown... pretty in the twilight. 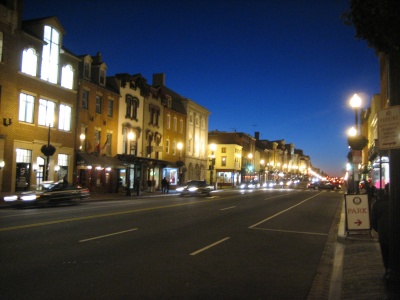 And I got to visit my cousin Scott...also my Aunt Ruth and Scott's wife Sandy. 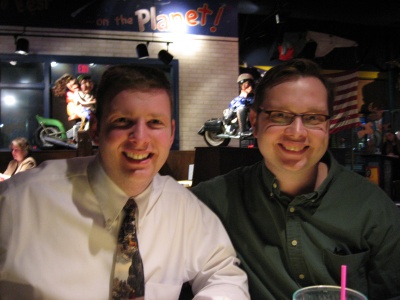 Restaurant of the Moment
Now, on this trip, last night I had a very odd meal... Chris suggested we go to ESPN Zone. I thought that the series of tables, each with its own small TV was a little odd, but our actual dining experience was even stranger... both of us sitting in a seperate recliner with a built-in swivel table, in front of a GIANT TV screen... I have to say, watching "talking head" sports coverage/interviews on a TV the size of most movie screens is...well, kind of tedious really. The giant screen was then flanked by a total of 12 smaller screens with different games going. (I would've thought almost any game would be better fare than talk talk talk, but what do I know, I'm not THAT much of a sportsfan.)

After we went downstairs to the arcade... we played an extremely overpriced (they use a swipecard system, so it's hard to calculate prices exactly but it was over $2) game of air hockey (set to play to 5 points...sheesh) and an older foozpong-ish ice hockey game.

Results of the Moment
Not that it drummed up that much interest, but I liked the night scene with the Washington Monument, and Ksenia liked the daylight one.