my gut tells me that's how our nervous system works

tech
May 2, 2006
Ok, I'm a day late and a dollar short with this, but Stephen Colbert at the White House Press Corps dinner is brilliant... a beautiful absurdist element runs through so much of it, as if you used a video projector to broadcast Fox News on Groucho Marx, except before he was dead. Or maybe it's just Dave Barry-like. But still. Some excerpts from this uneven transcript:

We go straight from the gut, right sir? That's where the truth lies, right down here in the gut. Do you know you have more nerve endings in your gut than you have in your head? You can look it up. I know some of you are going to say I did look it up, and that's not true. That's 'cause you looked it up in a book. Next time look it up in your gut. I did. My gut tells me that's how our nervous system works.

Because really, what incentive do these people have to answer your questions, after all? I mean, nothing satisfies you. Everybody asks for personnel changes. So the White House has personnel changes. Then you write they're just rearranging the deck chairs on the Titanic. First of all, that is a terrible metaphor. This administration is not sinking. This administration is soaring. If anything, they are rearranging the deck chairs on the Hindenburg.

BoingBoing has a more canonical set of related links. The video even has its own fan site, Thank You Stephen Colbert.

The Daily Show and The Colbert Report (pronounced with a soft T for both words) are... amazing. Maybe the most important thing basic cable has ever done; sharp, cutting satire that's also damn funny.

Kirktrivia of the Moment
More mundane things in my life for the avid consumption of my readership: I got a new desktop system, one continuing my obsession with compact consumer goods. This computer will be named Monk, sixth of that name. Here's the new hotness next to the old and busted... 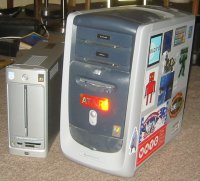 I've disappointed some of my Mac-friends by shunning the Mac Mini, even though it's smaller and could conceivably dual-boot to XP. My gut (heh) just told me to keep it simple, and this slab actually appeals to me more than the little box of the Mini, which seems like it would almost get lost on my desk. Since I'm pretty laptopped up, I mostly turn to the desktop when I need to hunker down and focus, and right now I still only do that well on Windows. Plus the new HP slimline also has some nifty features, like a built-in multicard reader and Lightscribe laser-etching for CDs and DVD it burns, if I'm willing to shell out a bit more for the media.

I ended up stickering Monk 5 quite a bit... I haven't decided if Monk 6 will meet a similar fate, or if I should try to keep things a bit neater. Anyway Monk 5 will have a good home... having a good hand-me-down recipient in mind is a wonderfully self-serving form of generosity when you really just want to upgrade. The new machine has proper USB2, and can actually show 32 bit color, so those will be some improvements beyond the form factor.

Now to get to taking away all the Fisher-Price crap UI and loaded up "special" offers and get to work...