photos
(11 comments)
July 13, 2006
So, yesterday I noticed an attractive beetle crawling on the window ledge at work: 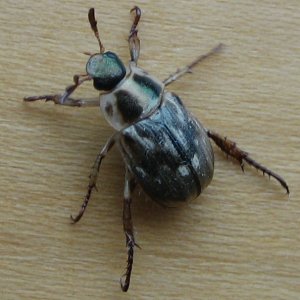 I checked, and lo and behond, my Canon SD400 has a nifty "Digital Macro" feature. Once I learned to stop messing it up with additional zoom, I managed to get some decent shots. The focus isn't perfect for all of the image, but with these 2 shots (Both are heavily cropped) I managed to get the important detail. 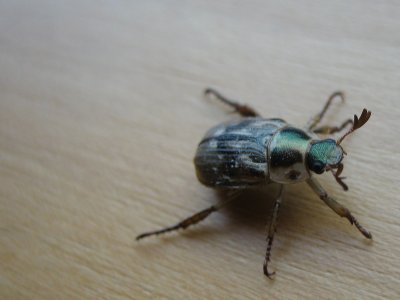 
The second one is resized to make good wallpaper, and both of these images have been added to my desktop wallpaper page. I think it's worth clicking to see the full version of both.


I was in a casino, minding my own business, and this guy came up to me and said, "You're gonna have to move. You're blocking a fire exit." As though if there was a fire, I wasn't gonna run. If you're flammable and have legs, you are never blocking a fire exit. Unless you are a table.

Essay and Jokes of the Moment
A longish but worthwhile essay on the jokes people in communist countries told. I remember one that I think Lena told me in college:

Stalin was walking through the park eating caviar on a bulky roll. An old frail hungry woman comes up to him "Please, Mr. Chairman, " she begins, "may I have a bit of your sandwich?" "No, get away from me, you stupid woman!"

The woman returns to her friends and tells them what happened. "Oh, I'm so happy!" she says. "Why?" they ask, "he was totally rude to you!" "But... he could have had me killed!"

For some reason it's the detail of caviar on a bulky roll that makes me remember that one. Ksenia told me another joke:

A woman sees a starving woman and her son near a zoo. She takes pity on them and gives the boy the apple that she had with her. The mother prompts her son, "well, what do you say?" The boy looks down at the apple, looks up, looks down and says "Hello, Apple!"

I posted a version of that joke in the comments to help explain my Hello, Money! greeting of newborn cash from the ATM, but I left out the poverty aspect, which, after reading the article, I realize is what made it a political joke rather than just a bit of absurd humor.

News Event of a Past Moment
Color me parochial but I don't think it sunk in that Mumbai is what used to be called Bombay.