photos
(2 comments)
August 14, 2006
So for our 2-year date-a-versary Ksenia and I went on the Schooner "Fame", which, oddly, was immediately below my room's window at Taxware, since it launches from Pickering Wharf in Salem,but I never took advantage of it. We'd strongly recommend this trip over the regular Boston cruises... Salem is in many ways friendlier and more interesting than that part of Boston, there's something lovely about moving by windpower alone, and overall the operation is a very...well, if not "family" affair, it's a small, tight-knit-but-friendly group making up its crew. It was built 3 years ago as the reconstruction of an old privateer vessel. (Privateering is interesting... I had kind of forgotten it was essentially government-authorized piracy.)

The view setting out was kind of amazing... hard to believe that's where I worked all those years. 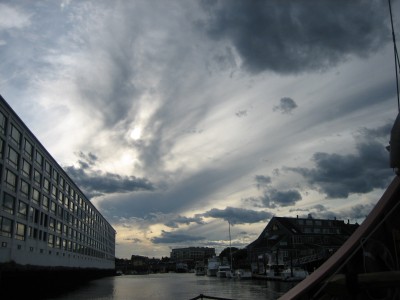 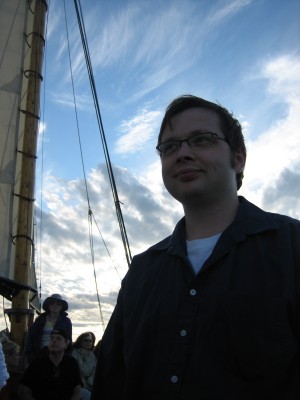 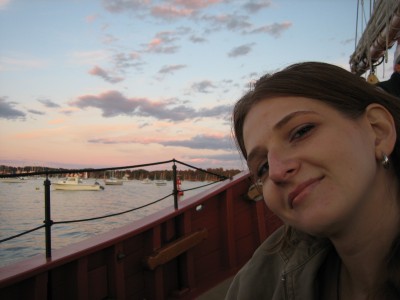 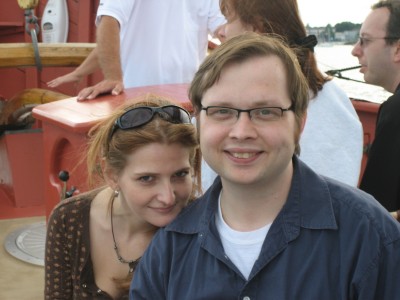 Random sail photos, guess I did a poor job of winnowing them out... 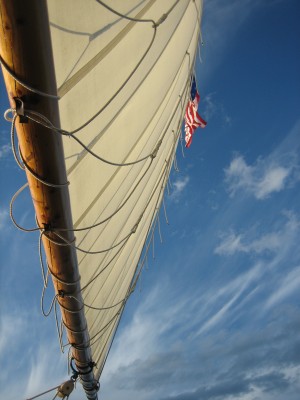 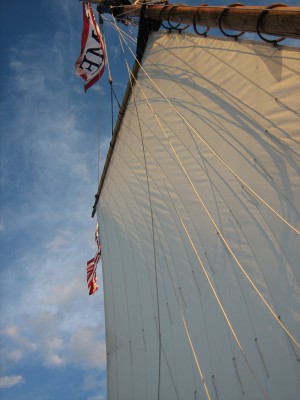 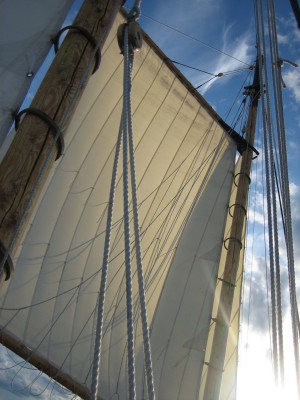 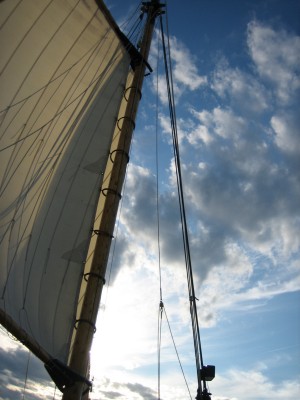 After we walked around Salem. In many ways the area seems to have the potential to be "the next Harvard Square, you know, before it got all commercial" but they really have to work on that "almost every store closed by 8 on a Summer Saturday night" thing. (Oh, I guess "being right next to the 'hood" and "overwhelmed with corny witch and monster motifs" aren't such good things either.)

There was one fantastic shop that was still open-- Derby Square Book Store. The piles of books are a must-see kind of thing, teetering towers that make grabbing a book in the middle a daring adventure. Even at the front counter, you deal with the owner through a gap between two of the towers that itself is only a big paperback or so wide. Unfortunately the owner says he's aiming to close by the end of the year... too many 80 hours weeks, he says, not enough time spent sitting around and watching cartoons. In the meantime the place has some very good discounts.

We went to a new restaurant there, "Fresh Taste of Asia". The menu had two sides, one more or less typical "pan-Asian", the other more Sushi oriented. The Sushi side only had one dish with a little "chef's choice" smiley face, the Tuna Tar Tar, though the waitress wasn't sure what it was. But it was so good! Lovely fresh tuna on these tasty light chip bowl things, with some kind of nice lightly spicy orange sauce on the plate... I took a picture just so I'd remember to mention it. 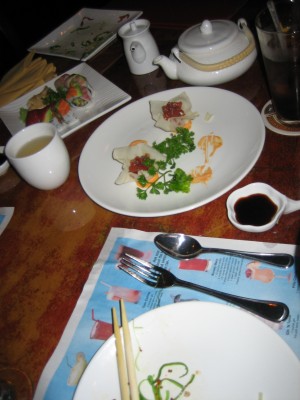 A lovely time in all.


Indecent Proposal of the Moment
As if people in a "blue state" state of mind didn't have enough reason to dislike the red... according to CNN and businesswire, comedia Jeff Foxworthy is... well, let me quote:

This mix of good-old-boy "wouldn't it be funny if..." jocularity, shameless huxturism, medically poor ideas, and desperation of the people who might really struggle to hit the deadline (or, almost as bad, couples who aim for the deadline 'all in fun') is mind-blowing.

Are their doctors willing to go along with this? Could this be a new medical specialty, on-demand baby delivery? Ugh.