(1 comment)
October 22, 2006
From the Acela train back from Delaware I saw the "Trenton Makes" bridge: 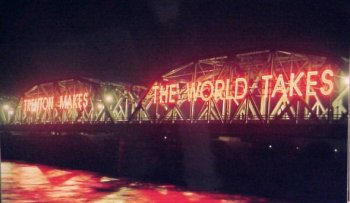 (Not my photo, though, I wasn't that quick.) Wikipedia mentioned that the bridge and neon sign is featured in the intro to the show "House" but I guess wasn't paying enough attention.

It was the slogan of Trenton back in the day, referring to the industrial output of the place. But it seems like such an oddly Ayn Rand-ian sentiment... it's a catchy slogan but seems to be saying the world is stealing, rather than engaging in fair commerce.

Trivia of the Moment
The origins of many band names. I think my favorite it still "Everything But The Girl", such a lovely note of malencholy in that even if it came from a British clothing shop ad.

Diplomacy of the Moment


But I think there is a big possibility ... for extreme criticism and because undoubtedly there was arrogance and stupidity from the United States in Iraq,

I can only assume his remarks must have been mistranslated. Those comments obviously don't reflect our policy.

That's the CNN.com headline story at the moment. It's the followup comment that amuses me... does it mean that it doesn't reflect policy for Fernandez to make comments like that, or that it's "obvious" that the USA's policy is to not be arrogant and/or stupid in terms of Iraq?