Cute new guy casualy remarks he likes the new girl he's started seeing, tactfully sending the message he's not interested in my flirting. My cute haircut, low cut shirt, makeup, all for nothing. Burnt to cinders in my
CRASH AND BURNNNNNN!

How cool was this dude? He's going to London next month for fun, has tattoos, likes Japanese snack food, appreciates the environmental issues of the show we work on, and did I mention for his day job he is cutting commercials for Oceans 13?

Well, maybe the security guard from Camaroon who's going to architect school will give me call.
--ErinMaru
(3 comments)
(11 comments)
March 29, 2007
So at work they rejiggered things so now the 3 new guys (myself included) are in the single "war room". Thanks to a coin flip (hint: always guess tails with American coins) I got the desk that doesn't have its back to the world.

I gotta say, though, that I will be forever bugged by people who, first thing in the morning, come into a room where people are already happily working and flip on the overhead lights. It's just so presumptuous not to ask, not to mention neglectful of the good karma of real light.

Advertising of the Moment
There's a T-mobile vendor in my building with what I find to be an amusingly out of date promotional poster. I snuck in this snapshot when the desk was unattended but the door was still open: 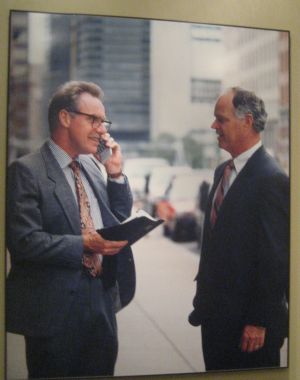 I mean, take a look at that phone! 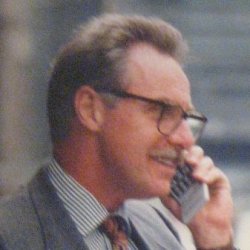 OK, it's probably not as amusing here as I think, and not a great photo but still... that sucker looks like it should have an old glowing red LED display. Though maybe I should cut them some slack, the company has the word "Pager" in the title so maybe they've been around for a while.

Concept of the Moment
Bill the Splut's messageboard (all its talk about errr, "legendary" cartoonist Gonterman) introduced me to a new concept, or rather, a name for an old concept: the Mary Sue:

a pejorative term for a fictional character who is portrayed in an overly idealized way and lacks noteworthy flaws, or has unreasonably romanticized flaws. Characters labeled Mary Sues, as well as the stories they appear in, are generally seen as wish-fulfillment fantasies of the author.

Often, a Mary Sue is a "self-insertion" where the author is blatantly writing themselves into their own story.

This concept helps me label what bugs me about, say, "The Dresden Files"... decent enough fantasy/horror reads, but the main character is just a bit too-- idealized, in a kind of Post-SCA kind of way. It feels like there are a few too many carefully selected character flaws and a few too many "humble superlatives", if that makes any sense.