(3 comments)
April 16, 2007
So in what I'm retroactively branding an act of solidarity with the Marathoners, I kept up my ideal of walking to and from the T-station, rain or shine. Err, today, that would "rain".

It's only my pants that got damp in an annoying way, especially the top part. maybe I should start wearing a trench coat or something on days like this.

Quote and Ramble of the Moment


But whenever I meet dynamic, nonretarded Americans, I notice that they all seem to share a single unifying characteristic: the inability to experience the kind of mind-blowing transcendent romantic relationship they perceive to be a normal part of living. And someone needs to take the fall for this. So instead of blaming no one for this (which is kind of cowardly) or blaming everyone (which is meaningless), I'm going to blame John Cusack.

He also blames "When Harry Met Sally" for making everyone think that, typically, you have two friends who refuse to admit they're in love with each other, when usually it's not symmetrical person, and the one person who doesn't feel the spark is either oblivious or wracked with guilt and pressure.

He also says "Every relationship is fundamentally a power struggle, and the individual in power is whoever likes the other person less." There's probably some level of truth to that, though I don't think it's absolute.

It occurs to me what that there are some very crass ways of thinking about online dating. it's been said the secret to happy romance is for both people to feel that they're at about the same level in terms of desirability, that unhappiness comes from the stress of dating out of your league. Maybe one secret to bliss is 2 people who both secretly think the other person is out of their league, but not so much so that they're wracked with insecurity.

Or, maybe I'm just full of crap and half-baked theories. 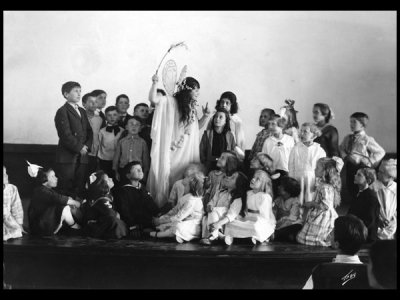 --I just liked this image of "The Health Fairy" from this Slate photo essay on the use of animal (and magical) mascots for educational purposes.