mr. hat, mc ballyhoo, and you

(2 comments)
June 10, 2007
So this is old news, but it came up recently, and I wanted to record the link: South Park's Mr. Hat is based on a "real" educational puppet called "High Hat". And I had lessons using him at St. Pats in Salamanca NY... I don't remember there being a puppet, but sheets and cards and general educational materials (though, Hmmm, I thought I remembered the hat coming over the character's eyes, unlike this current one... has South Park overwritten my childhood memories?) 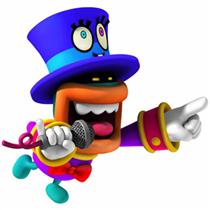 Actually I guess this came up because the Mario Party series released their first Wii entry (they're already up to 8) and the "host" is "MC Ballyhoo". (Actually, they've had a lot of different hosts over the series... I think it would've been better if they stuck with one iconic mascot. Anyway.) And in this case, the eyes belong to the hat itself, "Big Top". I guess there might be a shade of the Harry Potter sorting hat. (Tangential Wikipedia link: Magical Objects in Harry Potter) (Meta-tangent... I like the argument about the "Nimbus 2000" on Broomsticks in Harry Potter, just the way the page exhibits a kind of Wiki "multiple personality disorder" about how it compares to the "Firebolt", and if that means if "fastest model yet" was wrong, or how exactly the timing works out, etc...)

So after the EBling's birthday party (which also acted as a bit of a housewarming, despite much work needing doing before move-in) we tried a little Mario Party 8. The minigames all seemed pretty solid, which is the important thing, but they seem to have cut out the ability to unlock all the games for free play by not letting people set all 4 players to computer control. So either humans have to play that rather slowly placed board game, bleh, or maybe I can load a save game from the Internet...