tech
(8 comments)
July 6, 2007
I've already been accused of status symboling / bandwagon-ing, but yesterday I splurged on an iPhone.

I've come up with a few justifications for it. 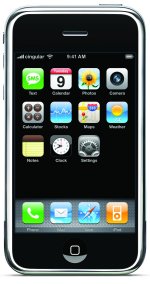 I was thinking about my various gadgets. The iPod Nano is just amazing, it gives me a small tangible thrill, it's so compact and elegant. And that humble Palm Z22 was doing a similar thing, with its lovely curved feel, and super-familiar interface. That Fujitsu lifebook, about as small as a laptop can be and still have a usable traditional keyboard gives me a good buzz.

My other gadgets, not so much. My Canon Elph is compact and takes great pictures, but it's not a delight. Similarly, my waterlogged Katana was never better than decent for me... plus it seemed to need its battery recharged way too frequently. I'm not so thrilled with the iPhone form factor, but it's still pretty slick.

Design wise... well, it's ok. I think glossy black and metal is a bit over-80s, but at least it's not the toilet white that was the old iPod hallmark. Looks a bit like a cigarette case from the back, actually.


"So are you going to play some Pac-Man CE?"
"Well I thought if I came over here, I should at least treat you to some two players gaming..."
"No, it's fine, I know how much that Pac Man game resonates for you."
"You're like my dealer! I better watch out or you're going to start charging."
"Yeah, that was my plan with the video games, 'first 9 years are free'."


I talked to a pretty wealthy lawyer in Cambridge, and he won’t go to Starbucks," says Simon. "For him, it’s an expression of his relationship to New England, but also to working people. Like he’s more populist through that.

I know dunkies is definitely not as good karma as any mom-n-pop place (And I do go to Gail's on Medford St whenever I get the chance) but still.