a more pointless than usual entry

(2 comments)
July 23, 2007
Had an odd dream where some little academic community, built around courtyard that had some kind of small nuclear reactor buried in the middle to provide for its power needs, was mysteriously cold and snowy even in the middle of summer. I suspected it was the reactor somehow gone awry but I didn't have any evidence.

Lyrics of the Moment

I love the painfully self conscious use of "like". (via Bill the Splut who is currently writing entertaining reviews of this old time serial Manhunt of Mystery Island.)

Odd Nostalgia of the Moment 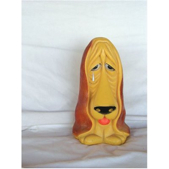 A boingboing plug for a book about "Objects with Unexpected Significance", little relics people have harped on, wouldn't have caught my eye except for the photo they used... I think I had this dog (which was made of wax or something?) when I was a kid. I was attached to it but my folks told me to leave it in the car "so the people in the store wouldn't think I stole it". Or something. I then vaguely remember stuffing it in the bell of my mom's trombone. Or something. This is not the most reliable of childhood memories, but darn it, I think I remember that dog.