historycool
(4 comments)
August 8, 2007
There's one anecdote I'll always keep with me... (in part because I noted it in my Palm journal) I was commuting on Memorial Drive one Tuesday morning in 1999, not far from that weird rotary at the end of the BU bridge, and was furious, letting myself get all road-ragey over the halted conditions. (In some ways I find it cathartic to let loose during that kind of situation, try to burn out all the irritations and frustrations of the day, but there's some real anger at the scene there as well.)

Anyway, I was ranting and raving over this Asian guy who had snuck in to the lane by tailgating the car in front of him -- in clear violation of the "alternate feeding" guidelines! -- that I thought were key to letting us all get through this mess.

So he looked at me in his rear view mirror, placed his hands on either side of his head, stuck out his tongue and waggled moose antlers.

I was completely disarmed. It was a perfect wordless Zen Koan, a reminder of just how seriously I should take the world and my current place in it.

Object of the Moment 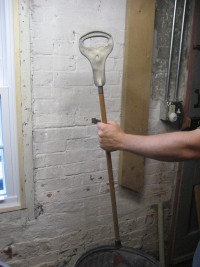 In Rockport, Evil B and I thought maybe we had found the world's biggest bottle-opener. Lots of leverage with that thing! 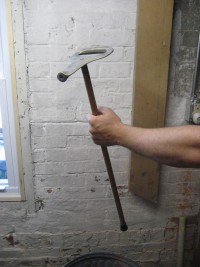 Turns out it's more like a cane, with a metal top that unscrews and reattaches to become a bicycle-seat like top for a monopod stool... clever!

Game of the Moment
Probably cooler in concept than execution, Design Your Own Deathstar.