photo
October 12, 2007
As Evil B pointed out to me, yesterday's entry was pushing the already high self-indulgence bar for this site. Mostly it was just a goof.

I was in Rockport helping EB clear way for an insulation work crew last night, and I crashed there and took the commuter rail down this morning. He mentioned that if you stay on the left side of the Rockport-to-Boston early train you can some nice sunrise views. I was too slow for some shots, but I thought this one was OK, if a bit pedestrian: 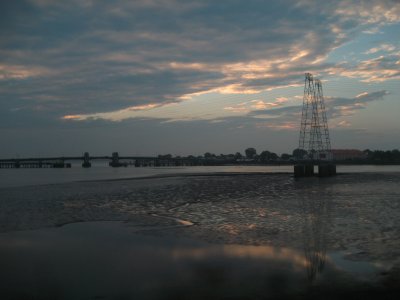 
Lieberman, Michel, and colleagues built upon previous study of seven competing rules for verb conjugation in Old English, six of which have gradually faded from use over time. They found that the one surviving rule, which adds an "-ed" suffix to simple past and past participle forms, contributes to the evolutionary decay of irregular English verbs according to a specific mathematical function: It regularizes them at a rate that is inversely proportional to the square root of their usage frequency.

In other words, a verb used 100 times less frequently will evolve 10 times as fast.

Other tidbits: New verbs entering the language are always regular, and the word "wed" might be next to go, with "wed" being dropped for "wedded"

Site of the Moment
Unclutter.com... yet another one of "those" sites, but pretty good.