(7 comments)
October 15, 2007
The other day I was sitting on the stoop of my Aunt and Uncle's place, and I caught myself kind of ogling a woman who was walking past, all curves and harmonic motions. I suddenly worried I was somehow living out this old cartoon by Booth I saw in this big New Yorker Cartoon coffeetable book my family had when I was growing up: 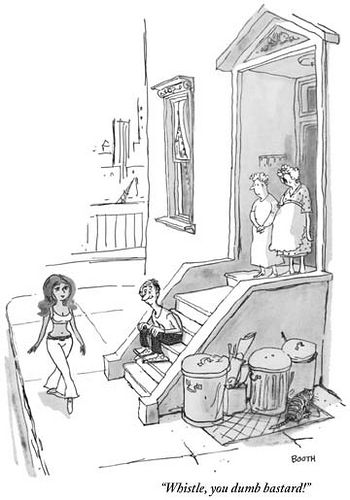 
Tolerated lawbreaking is almost always a response to a political failure [...] This political failure can happen for many reasons. Sometimes a law was passed by another generation with different ideas of right and wrong, but the political will necessary to repeal the law does not exist. Sometimes, as we'll see with polygamy or obscenity, the issue is too sensitive to discuss in rational terms. And sometimes the law as written is a symbol of some behavior to which we may aspire, which nevertheless remains wholly out of touch with reality. Whatever the reason, when politics fails, institutional tolerance of lawbreaking takes over.

Speeding is always the one that comes first to my mind.

The aspirational aspect of ignored laws is troublesome. All in all, it's a compelling argument for a more libertarian stance, or at least a minimalist approach to the making of laws.