Why panic? If we don't do it, we'll come back next year and try again ... If it doesn't happen, who cares? There's always next year. It's not the end of the world.

I guess a lot of fans are irritated with that kind of thinking, but to me it seems kind of sane. Stressing out isn't always the best strategy for winning, some say it was being in a hopeless situation in 2004 against the Yankees that let them relax and just play ball. (And "wait 'til next year" doesn't have quite the sting that it used to, though it's a bit odd to say that before the day is lost.)

The big problem is this team is less clutch than a '78 Gremlin. They've left more men on base than...err...an army general...whose wife had an affair with a sergeant...and so he canceled all the weekend leaves...

Personal News of the Moment
Boston.com coverage of My company Enpocket being acquired by Nokia. I've been meeting quite a few Finns.

Photos of the Moment
More stuff for my Photo Composition class-- focusing on shape in particular: 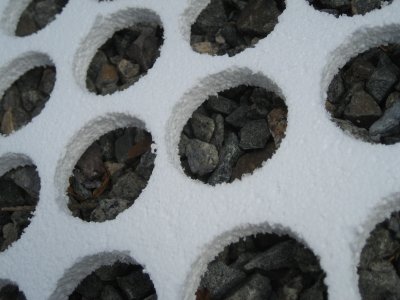 Very much not my usual style, in general I don't find abstract shots all that compelling. When enlarged this shot has some nice texture, however. This is the remaining styrofoam board after I spent a few hours drilling wall-hole-plugging discs for Evil B's place in Rockport. (The gravel you've seen before) 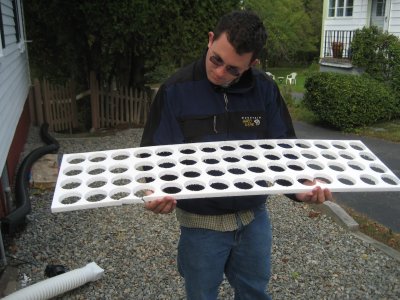 Evil B. This is a art joke that doesn't work, meant to be a reference to Michelangelo's Pietà.